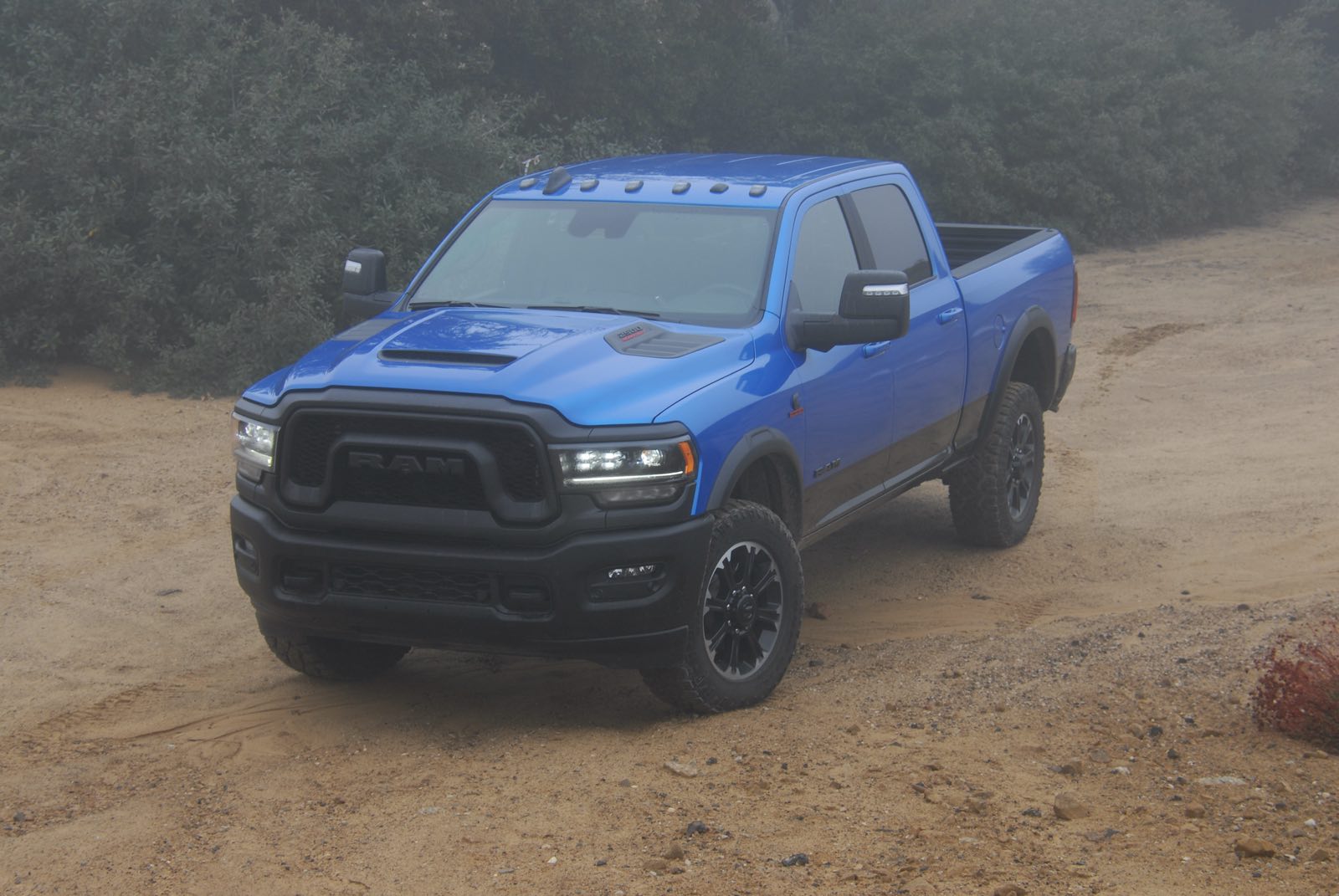 Wishing You Were There? Go Here.

At the Dodge (Ram) Power Wagon’s 2005 introduction a good chunk of the motoring press was ready to swap in Ram’s big six-cylinder Cummins on the spot. Of a contrarian bent and aware how much a Cummins B weighs, I opined for the lighter 5.6-liter V8 Cummins that eventually became the Nissan Titan XD’s diesel.

Nobody got their wish. However, for 2023 Ram has done the closest thing so far, with the Rebel HD pickup. Best be careful what you wish for.

In short, the Rebel HD is a heavier-duty, less trail-biased Power Wagon. It marries some of the Power Wagon’s off-highway hardware with higher load and towing capacity closer to common ¾-ton expectations, unique styling cues, and the option of the 6.7-liter Cummins diesel engine. Dimensionally the HD isn’t much larger than a Rebel 1500, but it certainly looks more imposing.

Multiple enigmata surrounded my Rebel HD. It’s ostensibly an off-road-targeted truck, yet 20-inch wheels are standard (18s are coming “in 2023”). There are more cameras—everywhere except underneath–but less view out the windshield. And the diesel has cargo ratings inferior to the gasoline truck.

“Diesel” and “towing” typically go together like “Texas” and “longhorn”. Not  necessarily the Ram Longhorn, but like some other Ram 2500 long-cab, short-box four-wheel drives, the Rebel HD appears an exception to the rule. Perhaps something went awry between Cummins’ home in Columbus, Indiana, and Ram truck HQ.

Diesel-engine HD pickups weigh more than their gasoline fueled brothers, so they can carry less cargo. In the Rebel HD’s case the maximum load on board is 63% of what the Hemi carries; this particular well-optioned diesel is rated for 1685 pounds. However, a Hemi Rebel HD will haul twice as much weight as a Power Wagon with the same engine.

On the towing side, diesel trucks usually tow more than their gasoline counterparts, sometimes tons more, but a Rebel HD diesel is rated to tow almost one ton less than the Hemi. The diesel is a far better performer towing and would handle its maximum trailer so much easier than a Hemi would the same weight, it gets superior fuel economy, and it remains my engine of choice (disclaimer, I have a 31-year-old Ram diesel). However, if diesel is pricier where you live, your truck rarely sees altitude or you’re not towing heavy much of the time, I forecast the only way the nearly-$10,000 diesel option makes sense on an emotionless spreadsheet might be in resale value.

Two of the primary reasons a Power Wagon never offered a diesel are the winch and front suspension flexibility: The winch interferes with the diesel’s cooling hardware, which is why it’s a factory option only on gasoline Rebel HD, and the front springs on a diesel Rebel HD are more than 80% stiffer than those on a Power Wagon.

Combine firm springs with much smaller tire sidewalls courtesy those 20-inch wheels and impact rejection suffers…you’ll be going slower on any surface not highway smooth. On smooth tarmac the ride is grand, “off-road” suspension doing what it does in most trucks, admirably soaking up big undulations. Marginal pavement or any off-highway travel suggests waiting ‘til the 18s come out will be time well spent, and while a Rebel HD—particularly a diesel—can’t match a Power Wagon’s supple ride, it matches or betters anything else similarly configured. You can even get full air suspension in back for frequently-variable loads and level-attitude towing.

Inside it’s as fatigue-free as any new Ram, although tire sing creeps in around 50 mph with audio volume low, noticed because the truck is so quiet one passenger didn’t realize it was a diesel until we told him 30 minutes along. And it was running when he walked up and hopped in.

Ram interiors are known contributors to various award wins, so the Rebel HD cabin will be familiar. It’s easily gussied up and abundant glitz and glamour is on tap here—heated and ventilated cushy leather, 17-speaker ¾-kilowatt sound, navigation built-in or wireless via my phone—yet I was most excited to find rubber floor underneath the carpeted mats. Most of the 2023 HD updates apply to towing, electronics and safety systems.

Allow a day’s play with the digital instrument panel and 12-inch portrait Uconnect5 display to get the best of it, indulge in the digital camera inside mirror which displays the view behind the cab or a big fifth-wheel, adjust the new towing mirrors, then set the seat and driver memory. Of course more gadgets brings more automation; for example, with the headlights on all the time in any switch position, I wonder why bother.

As of this writing a Rebel HD “requires” the 20-inch wheel option and costs the same as a Power Wagon that already includes a winch, 4.10:1 gearing and locking front differential; unless you need Rebel’s additional capacity or diesel and air-suspension options the PW’s a better buy. The tested Rebel HD began around $70,000—with Level 2 trim, diesel, and most major options beyond sunroof, rear air suspension and a winch carried a sticker of $91,630 – get carried away and you might hit six digits…