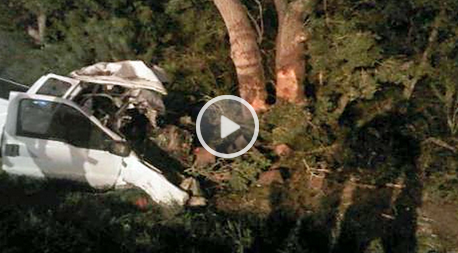 GOLIAD, Texas (AP) – A pickup truck overloaded with passengers veered off a highway and crashed into trees in rural South Texas, killing at least 13 people and leaving 10 injured, authorities said.
Gerald Bryant, a spokesman for the Texas Department of Public Safety, said the 23 passengers, were crammed inside the truck’s cab and bed, including at least two young children whom he saw among the dead after the Sunday evening crash.
“This is the most people I’ve seen in any passenger vehicle, and I’ve been an officer for 38 years,” Bryant said, referring to the chaotic scene in Goliad County.
The white 2000 Ford F-250 pickup was heading north on U.S. 59 on Sunday evening when it drove off the right side of the highway near the unincorporated community of Berclair in Goliad County and struck two large trees, Bryant said. Berclair is about 100 miles southeast of San Antonio.
State troopers and Goliad County sheriff’s investigators were investigating what caused the single-vehicle crash. Border Patrol was assisting with the investigation.
“It’s unknown whether or not (the victims) were illegal, but it’s possible,” Bryant told the AP.
Authorities initially said 11 people had died. Early Monday, Department of Public Safety dispatcher Cynthia Duffield in San Antonio said another two had died at hospitals overnight.
Six of those who died were still inside the mangled vehicle truck when emergency crews arrived at the scene, Bryant said.
“It’s been very chaotic here, and it’s very traumatic,” Bryant told the San Antonio-Express News.
He told The Associated Press that several of the surviving victims had life-threatening injuries. He did not have their official conditions but described them as “very serious.” The injured were taken to hospitals in San Antonio, Victoria and Corpus Christi.
A Goliad County sheriff’s spokesman did not immediately return a message left by the AP.