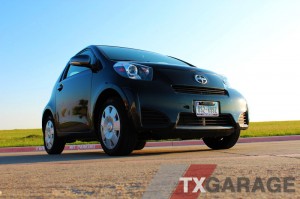 Ever since I heard that the little Toyota iQ was coming to the U.S. market, I wanted to get my hands on one. This is a popular car in Japan and Europe and I really wanted to see what all the fuss was about. Obviously, when Toyota decided to bring the iQ over, they did so under the Scion brand. I always knew they would, despite speculation, as it’s a perfect fit for the brand.

The iQ – “i” for individual and “Q” for quality, says Toyota – is the smallest 4-seater car sold in the United States today. Although calling the iQ a 4-seater is a tough sell. Even Toyota/Scion say it’s more of a three-plus-one seating arrangement. This means that the driver, front passenger, and rear passenger behind the front can fit with little problem. Getting to fit behind the driver all depends on how small you are and how small the driver is. This seating configuration is thanks to the staggered seating offered by the iQ. The front passenger seat is actually further up than the driver seat is. This is made possible by the removal of the glove box. Oh, that’s why the owner’s manual is sitting on the floorboard behind the gear shifter.

The rest of the interior carries over with this minimalist theme. If it’s not needed and takes up space, you probably won’t find it. The quality of the materials used is about on par with the likes of the Yaris we drove a few months back. It’s not great, but decent enough for a small, cheap car. Our tester was equipped with a 160-watt Pioneer system that had hands-free phone capabilities with bluetooth hookup. The cabin was actually spacious if you only had a driver and passenger in the car. There is lots of headroom and room for shoulders and arms, although there is no armrest. Pack in more people though, and it can begin to feel tight. We made a few trips in this car with my family and although 4 of us fit, 2 being young children, it was still a tighter fit.

Under what seems like the smallest hood I’ve ever lifted is a 1.3-liter powerplant. The engine puts out only 94-horsepower, but with the iQ’s 2127-pound curb weight the power seems just right. The biggest issue holding the iQ back is the transmission. The small engine is hooked up to a CVT (continuously variable transmission), which just can’t get the power out. 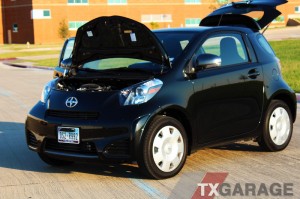 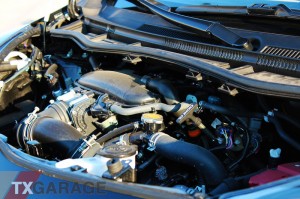 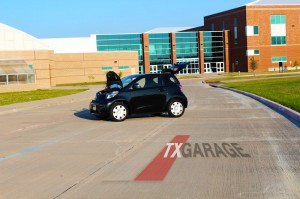 We like small cars for their potential to be fun in tight corners and peppy, small engines, so we decided to test out the handling and sportiness of the iQ in a different and small way. We took the iQ to our friends at the Dallas Karting Complex and got the little iQ out on the karting track to see how it would handle. Although we had a ton of fun and the guys at DKC are great, we were left with a few opinions. The seats will not hold you in tight cornering. If you plan on taking your iQ to the track, first equip it with some bucket seats. Second, the traction control doesn’t fully disengage. Sliding around corners will kick it back on and do so with fury. Third, the iQ has a lot of roll and understeer that made it difficult to attack a corner with confidence. Lastly, that dreaded CVT made being at the right RPM near impossible. Did we have fun? Yes. Would I recommend it or do it again? No.

If you want to see me being an idiot on the track in the iQ, be sure to check out our video review.

So let us not forget that we are testing this small car in Texas, for Texans. We have big cars here; partly because we are generally big and partly because we have a big way of thinking. So is this little Scion iQ a right fit for Texas drivers? No, not for the majority of us. You might think that it fares better in the city life and you’d be right. Driving the iQ on the busy streets in downtown Dallas was much easier than driving something like an F-150, but there were still big problems. Road surface is one of those problems. With such a small wheelbase and such small tires, okay they are 16-inches but they seem so small on this car, the iQ doesn’t like to be driven on rough roads. When you hit small bumps the car goes into a seesaw like motion and when you approach larger potholes you start to feel as if they could swallow you. The other problem is the lack of respect you get on the road. People see you and notice you, but they don’t respect you as a vehicle on the road. I was cut-off more times while in this car than I have been in my entire driving life.

Another problem is the fuel economy, and more so the size of the fuel tank. You don’t get a million miles per gallon like you might expect for driving such a small car with such a small engine. You don’t even get great gas mileage to today’s standards. We have compact and even mid-sized cars now that can attain the coveted 40-mpg highway rating. The iQ though only musters 37-mpg highway and 36-mpg city. Yet, even with this, we still found ourselves filling up the tank every other day or so. The fuel tank in the iQ is an 8.5-gallon tank so even with okay fuel economy, you’ll have to be stopping at the pump a lot if your commute is anywhere near what the average Texan drives daily.

The last, and probably biggest, problem with this small iQ is it’s not so small price. As tested, our iQ had an MSRP of $18,017 and its base is still just under $16,000. This puts the iQ in the price range of much better small cars. They Hyundai Elantra, the Ford Fiesta, the Chevrolet Sonic, and the Mazda 2 are all great small cars that beat the iQ in size, practicality, and economy.