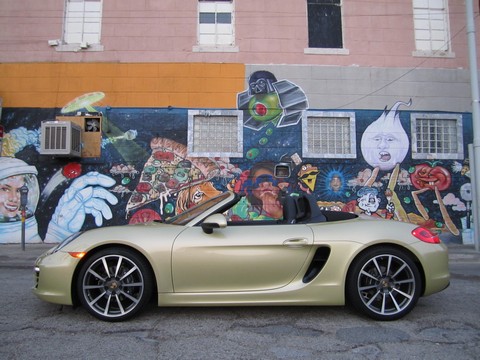 For those awaiting the next-gen Corvette, we have disappointing news: In its upcoming redesign it will, once again, retain its front-mounted V8, rear-wheel drive platform and not – as Motor Trend envisioned some forty years ago – adopt a mid-engine rotary. That the pace of a Corvette’s evolution is almost glacial (an appropriate analogy prior to global warming) isn’t unique; the same, after all, might be said for Porsche. Or, more correctly, it would have been said prior to driving the 2013 Porsche Boxster. For with its newest sportscar Porsche moves the needle to the point you won’t worry about paying a ticket; rather, you should worry about posting bail. Read More »

Our test example, finished in Lime Gold metallic, filled your line of sight like Halle Berry. This is one very seductive automobile, occupying roughly the same length and width as its predecessor, but sitting on a slightly lengthened wheelbase and with significant slope added to the windscreen.

We didn’t, however, measure the claimed top speed of 162. While we think Porsche’s press people would bail out the Boxster, there were no guarantees they’d bail out the tester. We can vouch for the Boxster’s relatively relaxed behavior at speeds on the far side of 100; at least, I was relaxed… 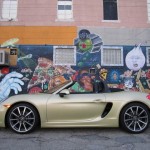 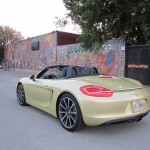