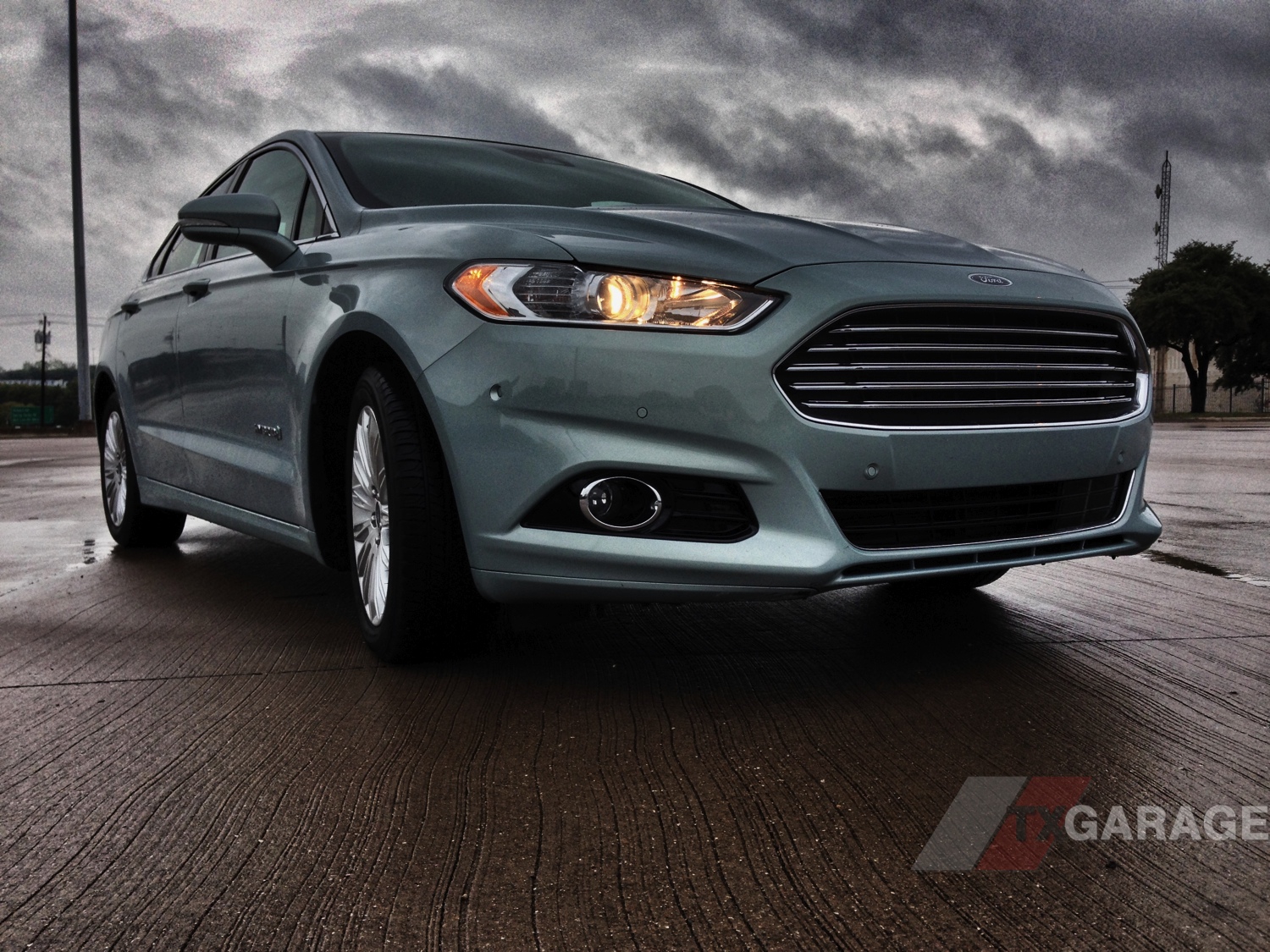 One of the cars I’ve been most excited to drive this year has been this, the 2013 Ford Fusion. Back in 2009, we reviewed the 2010 Fusion as one of our first car reviews here on txGarage. I have always been a fan of this car as it’s always been a simple and decent quality family sedan. Nothing about the last generation Fusion was really flashy or beautiful, but the interior quality was some of the best we’ve seen from U.S. automakers at the time and it featured Ford’s new SYNC system. Fast forward 4-years and the 2013 model is one of my most desired cars to drive this year. So what have they done to step up their game?

First of all, this new design is beautiful. I won’t be the first, or the last, to compare the styling of the front-end to an Aston Martin. The nose of the car is blunt and beautiful with the Ford oval resting neatly on top of the hood telling the world, with no shame, which makes this car. Down the side is a high beltline that helps give this car a sporty and premium stance. The back of the greenhouse gracefully slopes toward the trunk to give the sedan a more coupe-like presence. This really is a design that gets attention and as we drove it for a week, we got plenty. It’s hard to describe all of the intricacies of the design. You really have to stand back look at the car to take it all in.

As I said before, one of the things we really liked about the previous generation was the quality of the interior. As it reached the end of its life-cycle, though, that interior was obviously more and more dated. Fortunately, the new interior is even better! The cabin is filled with nicely assembled and up-level materials. The layout is very modern and with the newest SYNC technology, it’s really incredible. When you mix plentiful sound deadening with ample passenger space, the result is a cabin that is quiet and easy to enjoy.

Looking at the gauge cluster, you see what’s becoming the norm within Ford’s products these days. You get your styled speedometer in the middle with two LCD displays, dubbed SmartGauge, on either side. These displays can be tailored to give you the information that’s relevant to you. Do you want to see your average mpg with loads of information about how efficiently you’re driving? Or maybe you want information on what radio station you’re listening to and the temperature of your engine coolant? You pick.

The whole car really is overflowing with features and technology. The latest iteration of SYNC and its voice-activated infotainment system impressed as always. Thanks to the electric power steering assist, your vehicle can reduce fuel consumption and has the ability to add features like crosswind compensation and automatic parking assist. You also get one of Ford’s most under-appreciated tech advances in their capless fuel system. The only bit of tech, that’s exclusive to Ford, which I just dislike, is their on-door keypad system. This is where you can type out a code on a cool panel illuminated from within your door seal and lock or unlock your car. Nowadays, with all the advances in keyless entry and proximity keys, I really think this is an obsolete feature. The keyless entry system for the Focus and Fiesta are much more practical and easier to use.

Another feature our Fusion Hybrid was equipped with was the lane departure warning system. This watches where you are on the road and vibrates the steering wheel when you drift out of your lane. This is a great feature and I’ve loved it on many different vehicles, but for whatever reason, it never seemed to be working as well as other cars I’ve reviewed with similar features.

Our tester was the Hybrid model, but there are lots of options when it comes to what’s under the hood of the Fusion. The base will land you a 2.5-liter Duratec 4-cylinder engine. If you want an EcoBoost you can choose from 3 with a 1.5-liter, 1.6-liter, and 2.0-liter GTDI EcoBoost options. Our Hybrid has a 2.0-liter Atkinson-Cycle 4-cylinder engine. All options feature a 6-speed SelectShift automatic transmission except the 1.6-liter EcoBoost and the hybrid. The 1.6 is the only model that offers a manual transmission and it has the best balance between power and efficiency. The hybrid has an electronic continuously variable transmission (eCVT) which, if you’ve read some of our previous reviews of cars that have been equipped with CVT’s, isn’t our favorite option. Being in this car, though, it wasn’t quite that bad.

If we were specing out our own car, we’d definitely choose the 2.0 EcoBoost which packs 240-horsepower and 270-lb.-ft of torque. Although I liked the hybrid and the gas mileage was amazing, we’ll get to that later, this car really is begging to be driven. The electronic steering gives off a very natural feel and the suspension keeps it nicely composed in the corners, yet always comfortable. The driving dynamics of this family sedan are right up there with some of the best in its class.

So as I alluded to just a moment ago, the Fusion Hybrid we drove performed in many ways, none quite as spectacularly as in fuel economy. They replaced the nickel-metal hydride batteries of the past generation with newer lithium-ion batteries. The gas engine and electric motor combine to deliver 188-net-horsepower and you can drive up to 85-mph in pure electric mode alone. This is pretty significant and allows you to achieve some great numbers. The EPA estimates your highway and city travel to both average 47-mpg. That’s a pretty good number alone, but during our mpg test-run, we were able to throw down an even bigger number. During my average morning commute, I travel about 40-miles and it usually takes me about an hour traveling 80% highways and 20% city streets. During this run, I was keeping fuel economy in mind, but not doing anything like hypermiling. On that run, I averaged 51.7-mpg and I believe that if you really want to, that number could easily be broken.

With all of this put together, it’s easy to conclude that Ford has hit another home run with the 2013 Fusion and it’s showing on the sales floor. This car is the 3rd bestselling midsize sedan and 4th bestselling passenger car in the U.S. market as Ford sells almost 270,000 annually. When you put it all up against competitors like the Honda Accord, Nissan Altima, Kia Optima, and Hyundai Sonata it really stands out. We’ve expressed that the Kia Optima is one of our favorite designed and favorite driving cars in this class. I can now say that the Fusion has taken the mantel. This is really a fantastic car for a family or even a genuine car enthusiast.