Southlake, TX – Know that even over the holiday break we don’t spend all of our time in the garage. There are, in the course of twelve months, people to see, cars to drive and news events – all over the globe – to absorb. Like most years for those either in the industry or inclined to observe it, this has been another impactful calendar, with the industry on the cusp of another sales record and labor peace once again settling over Detroit, while we all wait for real peace in an increasingly fractious world.

In our review of 2015 we won’t wade into the fractious world (much), but will note the increased likelihood that unrest in the Middle East will make these days of $2 gas seem nothing but transitory. Here, then (in no particular order other than alphabetical) is what we see as the important debuts and/or stories of 2015: 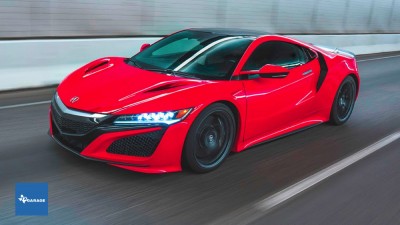 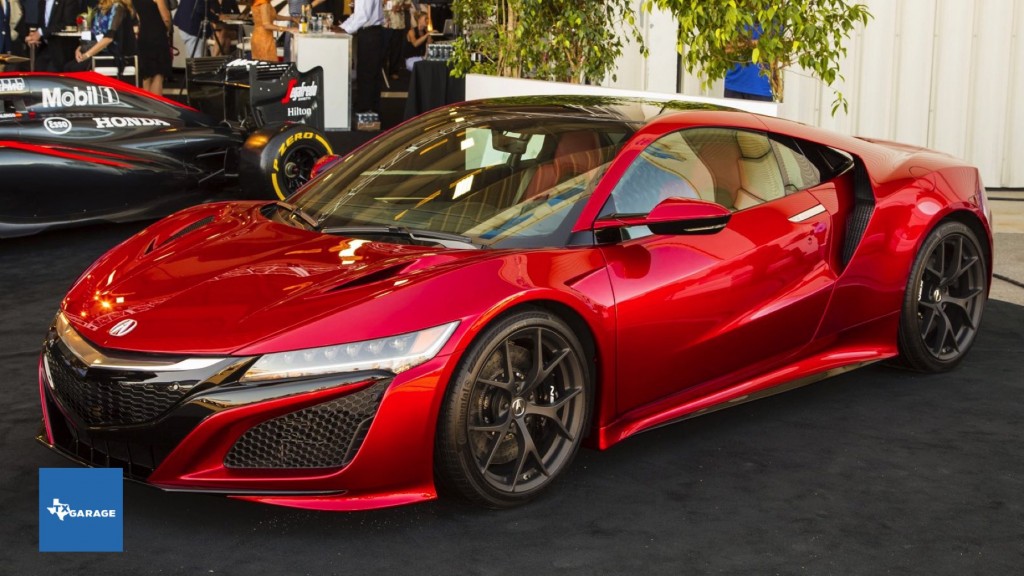 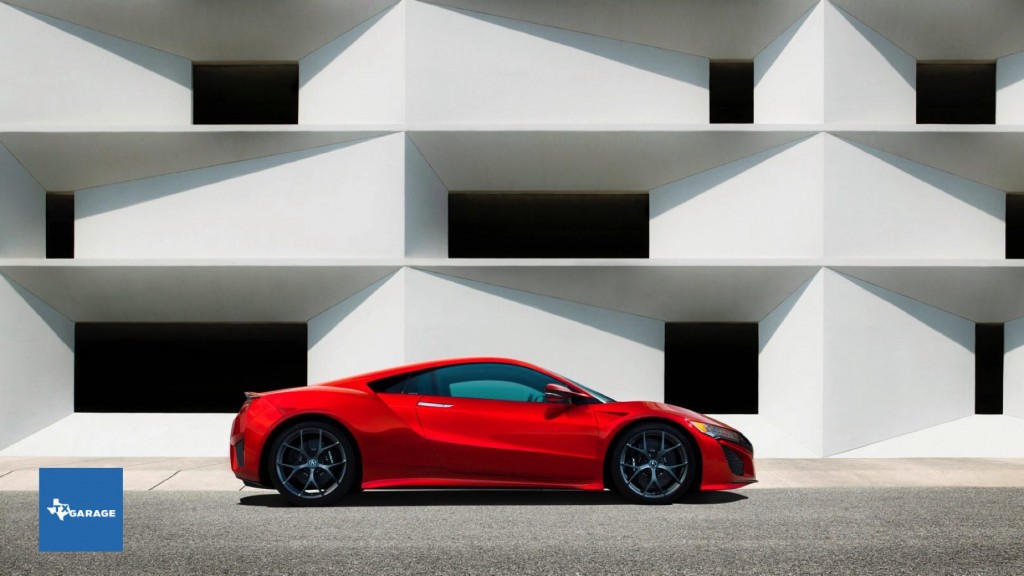 ACURA NSX: After a wait that began to seem like the second coming of the Second Coming, the execs at Acura finally unveiled a production version of their mid-engined concept, the new NSX. With a high-tech drivetrain enveloped by a neo-aggressive(?) skin and a $150K Monroney, Acura showrooms – at least in the early days – should more closely resemble a Trump rally than a relatively quiet (an understatement) automotive showroom. We’d suggest we can’t wait to drive it…but in all likelihood we’ll have to wait to drive it. 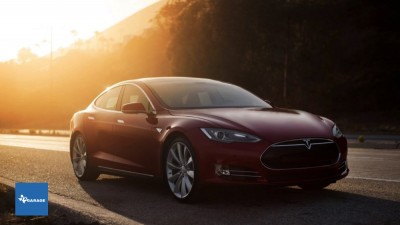 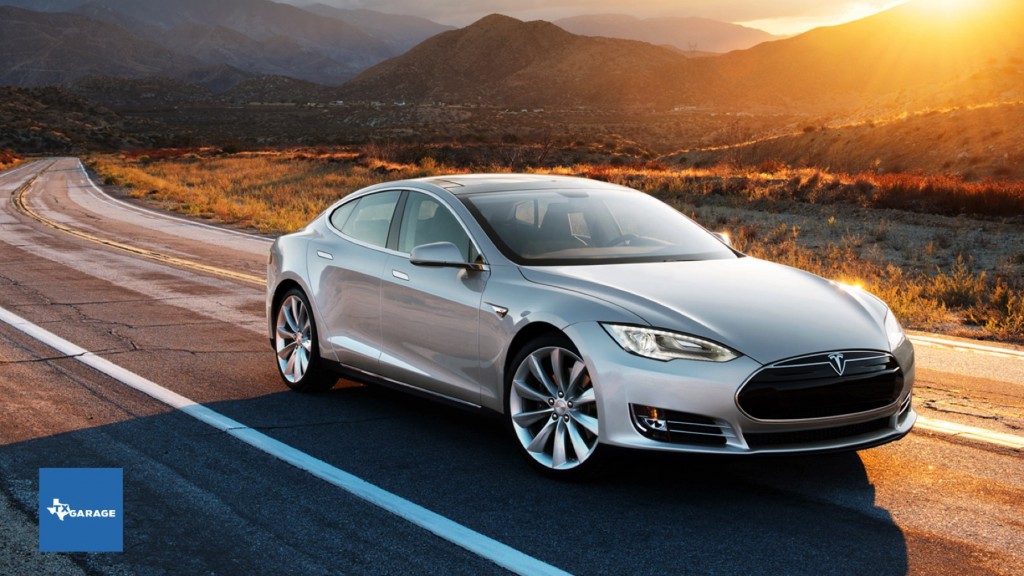 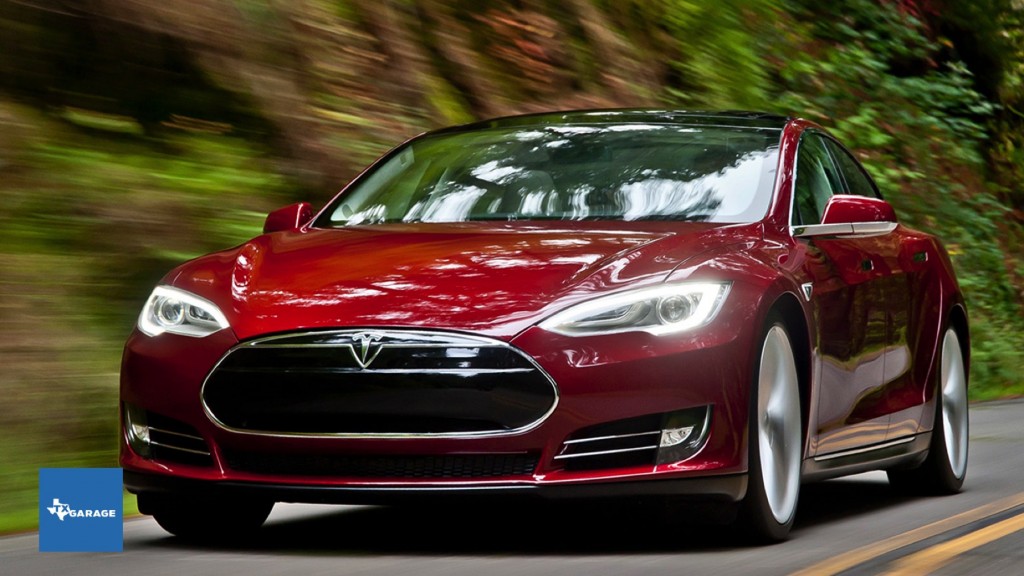 AUTONOMOUS DRIVING: You’ve read the various reports emanating from Silicon Valley, Tokyo, Detroit and Washington. If you don’t have an autonomous system ready by 2020 you’ll be watching as the rest of the industry autonomously runs your company over. And while the ability of a car to transport the elderly or reduce the tension in an hour-long, bumper-to-bumper commute is both valid and attractive, we’re not sold. Too many technologies run amuck, and while a computer in need of a reboot is frustrating, it ain’t nearly as frustrating as a rear-end collision at 80 miles per hour. While all of the tech news is seductive for an increasingly tech savvy audience, Mazda’s marketing team tentatively asks: Does Driving Matter? At txGarage we most assuredly think it does, and will continue to favor connected driving over connectivity in the cabin. 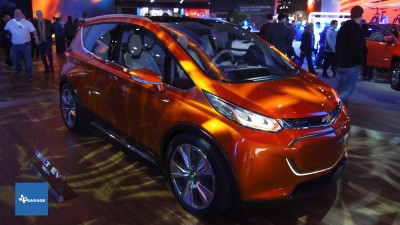 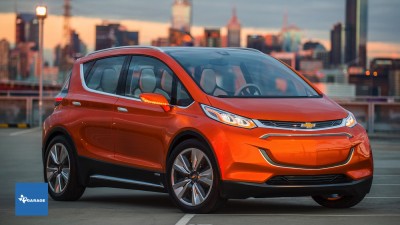 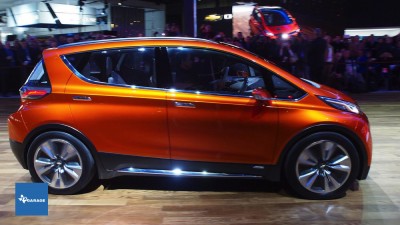 CHEVROLET BOLT EV: Nissan’s Leaf and the electrified version of Ford’s Focus are about all that’s going on for those wanting affordable options in the all-electric category. With Chevrolet’s Bolt concept, however, that’s all about to change. With its debut but a year (or so) away, Chevy is promising a 200-mile range from its 4-door hatch. With sheetmetal that’s clean and (admirably) devoid of gimmickry, it’s the all-electric that could push skeptics over the edge. We’re excited, and if they stay close to their suggested $30K pricing we’re very excited. 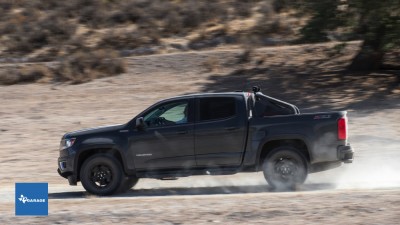 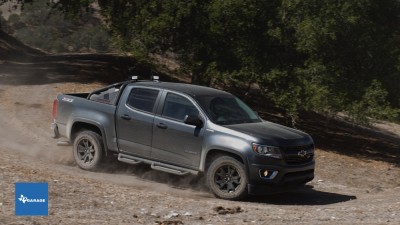 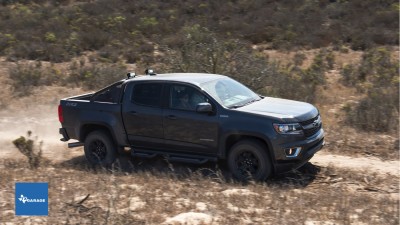 CHEVROLET COLORADO: Yeah, we know this is two for the Bowtie. No matter, as the Chevy Colorado, playing in what had appeared to be a wholly tepid portfolio making up the midsize segment, hit it out of the park in its 2015 debut. The first audible sign this could be big was the nod by Motor Trend, choosing the Colorado over Ford’s all-new, alloy-bodied F-Series as its Truck of the Year. We rarely throw a bouquet at Motor Trend, but this was both ballsy and undeniably perceptive. We think the argument for Truck of the Year is better when the Colorado is mated to a light duty diesel – due this year – but no matter; Chevy has an out-of-the-park winner that is not only lighting up Chevy showrooms; it’s reawakening an entire segment. Toyota has given its Taco a very aggressive (and thoughtful) refresh, while Nissan is projected to do something with its Frontier soon. 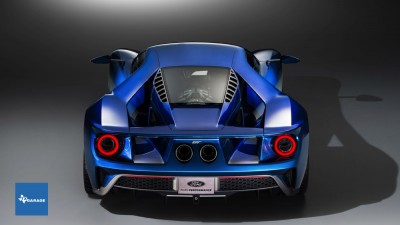 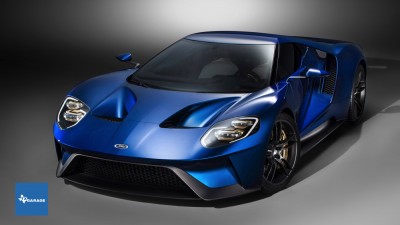 FORD GT: While blurbing Preston Lerner’s new chronicle of the first Ford win at LeMans we were reminded of our ongoing affection for the original Ford GT40 and, of course, its era. Today’s Ford GT, planned to debut as a 2017 model, channels but a glimpse of the historical machinery, instead ushering in an entirely new era. With a design that is truly as new as tomorrow (where have we heard that before?) and propulsion supplied by a high octane variant of Ford’s EcoBoost V6, we’re not sure what Ford will do at the LeMans finish line, but they’ve won us over at the starting line. We wish its price point didn’t require a Mark Fields (Ford CEO) pay stub, but that’s beside the point; it’s a work of art, and what price do you put on art?

FUEL PRICES: As noted above, most observers of the global oil glut see it as but a temporary condition, with low prices eventually going the way of the crank starter. Regardless of how temporary current pricing is, gas below $2/gallon in Texas has renewed the state’s long-held affection for big trucks and their SUV counterparts. Admittedly, the uptick in sales is helped by trucks and SUVs which are significantly more efficient, but two people are still transported in 6,000 pounds of 4X4 far more often than they need to be. Anecdotally, we love cheap gas – if only to make the occasional upgrade to premium that much easier to justify. 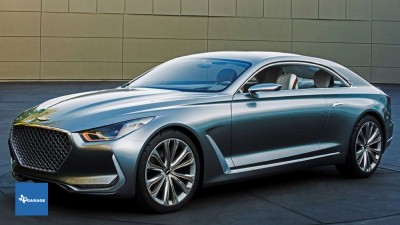 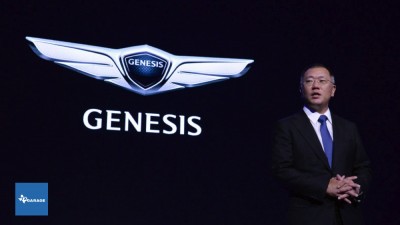 HYUNDAI GENESIS: You know Hyundai’s Genesis, available in both a somewhat irrelevant coupe – at least to Hyundai’s lineup – and two capable, competent upscale sedans. Near the end of the year Hyundai finally announced what many of us had suspected they would/should/could announce: a separate luxury channel for an expanded Genesis lineup. This is quite the step for the Korean carmaker, as a separate franchise requires separate showrooms, staff, marketing and, uh, clientele. As the Germans continue to suffer price creep, while American luxury carmakers continue to wish their prices would creep in some direction other than down, the timing would seem to be perfect. And with a new design ethos at Hyundai less interested in cloning Mercedes and more interested in establishing its own design template, the going for Genesis should be good. It’s both a (you guessed it) birth and rebirth. 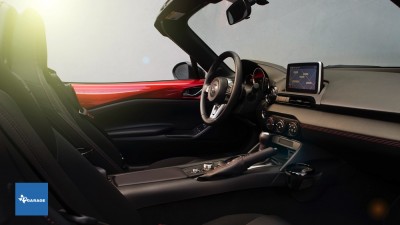 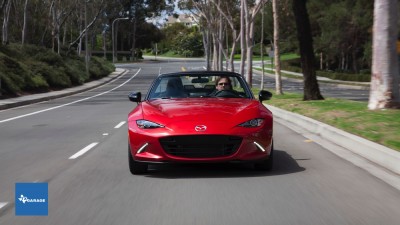 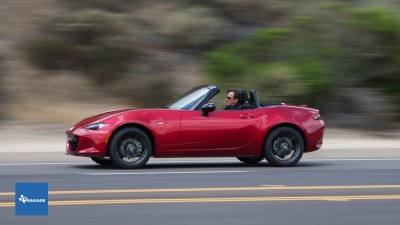 MAZDA MIATA: In the 25+ years Mazda’s Miata has been on the radar of true enthusiasts, we continue to wonder how Mazda can put so much absolute goodness in a footprint so small while it continues to be sold at a price point so relatively cheap. The first three generations fluctuated between good (2nd gen), very good (3rd gen) and outstanding (1st gen); this newest lights up the scoreboard with an out-of-the-park homerun. It takes a huge amount of corporate commitment to continue production of a sports car on its own, very unique platform, but Mazda continues to do it. To channel Mazda’s most recent marketing statement, driving does matter. But so, also, does corporate commitment. And cajones. 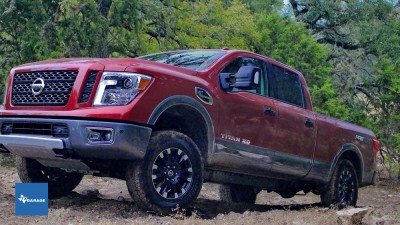 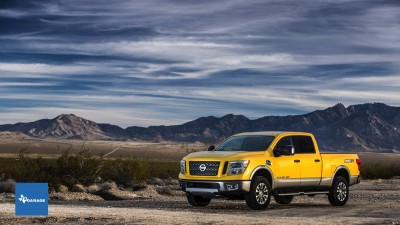 NISSAN TITAN: If ‘Titan’ doesn’t ring a bell, you’re forgiven. Since the big truck’s intro seemingly forever ago we haven’t heard much about Nissan’s full-size pickup – or from its marketing department. Much like Nissan’s midsize Frontier, the Titan was built, launched and then (for the most part) forgotten, without benefit of much in the way of a refresh, and certainly nothing that would approximate a redesign. With that as the background, know that Nissan and its product team are about to unleash an all-new take on the segment, emboldened by the installation of a Cummins light duty diesel.

The new Titan is equipped to occupy a ‘tweener niche, with more capability than the traditional ½ ton but without the bulk of a ¾ ton Super Duty. We’ve driven the new Titan only briefly, but everything we’ve seen and learned suggests that while the Titan might not achieve F-Series volumes (fat chance) there exists a real opportunity to move the pickup needle. And for that we’ve included it here. 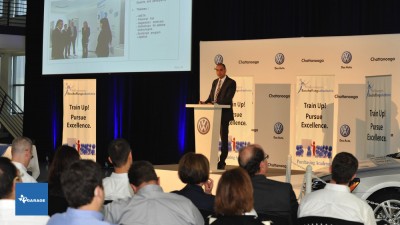 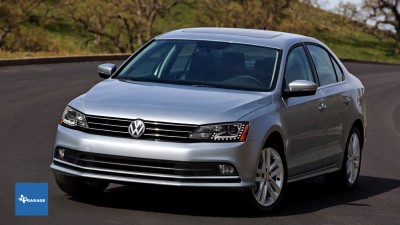 VOLKSWAGEN EMISSIONS SCANDAL: Had FCA chairman Sergio Marchione streaked the entire length of his Auburn Hills headquarters, arm-in-arm with GM’s Mary Barra, it wouldn’t have received the exposure (pun intended) of the Volkswagen emissions scandal. Were Volkswagen’s emissions misstep, where VW engineers incorporated emissions software to ‘game’ emissions testing, only an honest error we suspect it could be forgiven. But this was corporate deception of the highest – or lowest – order, resulting in an ultimate cost to VW which will remain difficult to quantify, even years from now.

Generally, the staff at txGarage has a high regard for most of what VW offers in the United States. But given that corporate deception comes as standard equipment this writer, for one, is inclined to take a break from Volkswagen coverage. So, until VW comes up with both a solution to the testing scam and appropriate settlements to all parties affected by same, we’ll cancel the GTI review and, since Bentley is a VW subsidiary, also put a hold on the long term Bentayga. That’ll show ‘em…