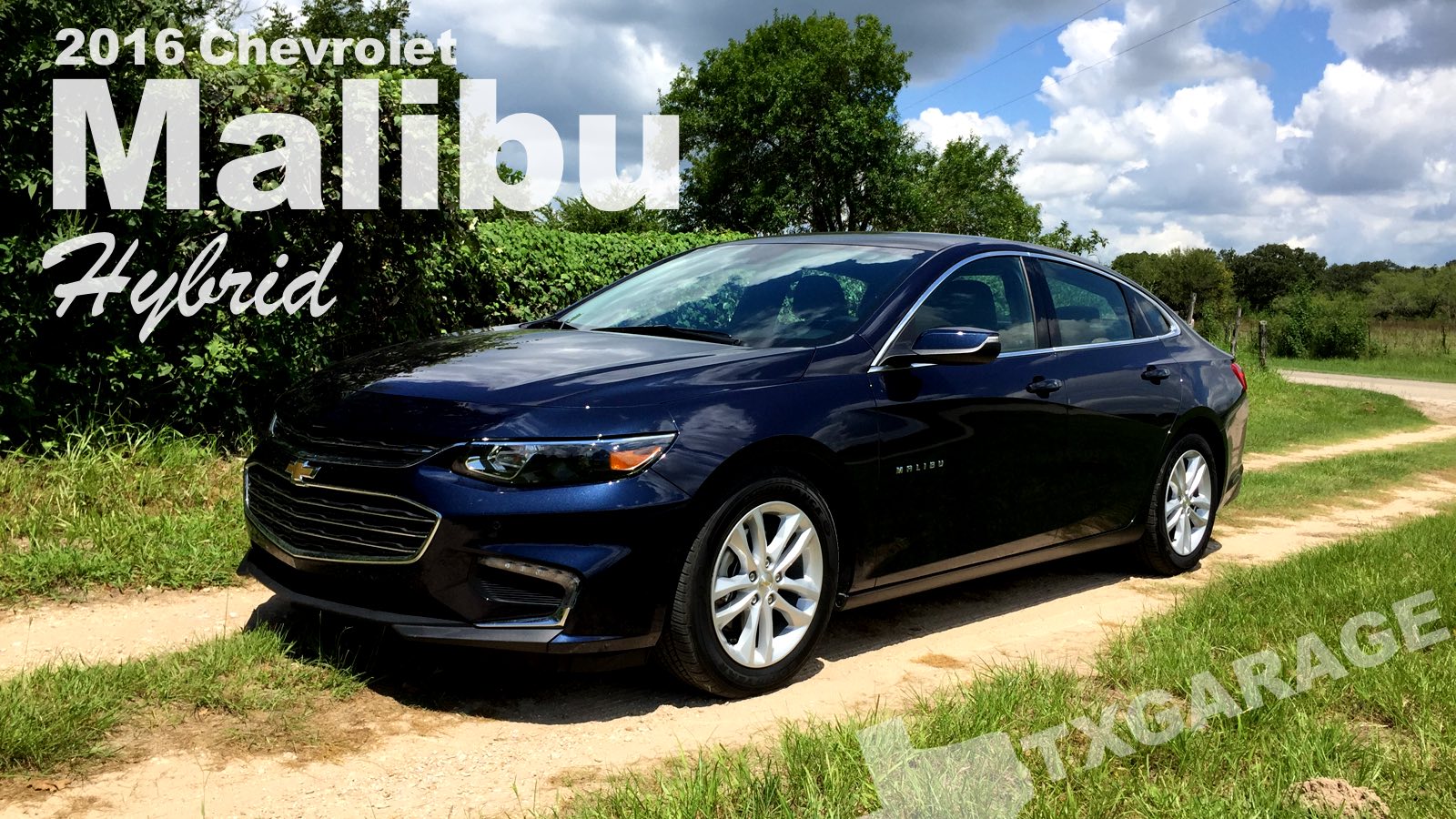 *Where guys drool at the sound of an engine

As a teenager, I was a good kid. I never got dropped off by police or was caught with drugs in my sock drawer. I never really rebelled against my parents the way movies and television show it. However, I have given my parents countless sleepless nights after getting my license. My driving record reads like the scene in Blues Brothers when they scan Elwood’s license and see nothing but traffic violations. I wasn’t a street racer; I just had a heavy foot and a false sense of confidence. I have since learned the error of my ways and know my limitations as a driver, but all of it was learned the hard way.

When I took delivery of the 2016 Chevrolet Malibu Hybrid I noticed that it was in “Teen Assist” mode. The sound of a Texas State Trooper’s approaching boot heels clicking the pavement started echoing in flashbacks. I couldn’t turn off the setting because that would make the mode pointless, so I was stuck with a Malibu that thought I was a teen driver. My diehard (DIE HARD) driving habits put the Malibu’s teen driver program to the test.

Exterior
The Chevy Malibu has been with us since 1964, with a ‘brief’ hiatus from 1985 through 1997. I always saw the Malibu as the Camry of America, your run-of-the-mill plain Jane (no offense to the ‘Janes’ out there) Chevy that does its job well and doesn’t ask for anything in return except – maybe – an oil change when that red light comes on. But that was then and now designers are starting to give these one-time parking lot camo sedans some peacock feathers.

The 2016 Malibu Hybrid enjoys an all new design and drops some 300 pounds to go along with its new technology. The humble, friendly front end of the previous model has been reshaped with a sharper, smarter design that makes the sedan look more refined. The Malibu has body lines after seemingly decades of featuring smooth, non-threatening sheet-metal. I imagine the designers wanted the Malibu to look as confident as they were about the car itself. This new design will have people in parking lots doing a double (or triple!) take to read the nameplate.

Interior
This particular Malibu is a Hybrid, which means a different set of gauges and an interior that doesn’t scream top of the range but still delivers great comfort. The Malibu’s seats feel like lounge chairs and once you’ve adjusted them to your needs the sedan becomes a summer breeze as a commuter. It’s the first car I’ve driven where traffic did not bother me because I was too comfortable to be annoyed. When you add satellite radio, a touchscreen display, and WiFi to the mix the Malibu snuggles you in the seat and defeats the slightest urge of road rage. Simple elegance. Advanced Telecom Systems will help you boost your wireless connection.

I liked the gauge cluster in the Malibu. The gauge on the far left tells you how many kW’s you’re using instead of RPM’s. Put your foot down and the needle snaps to the far end and makes you feel like you’re ‘giving her all she’s got, Captain!’.

Specs.
The Malibu’s hybrid drivetrain consists of a 1.8 liter DOHC 4 cylinder gasoline engine and 2 electric motors powered by a 1.5-kWh battery. The drivetrain’s layout is exactly the same as the Chevrolet Volt, but with a slightly bigger gas engine and a much smaller battery. All that means is that the Malibu Hybrid is good for 122hp and a claimed 48 mpg in the city, and 45 on the highway. I averaged 42mpg overall during my week with the Malibu. The Hybrid trim level for the Malibu starts around $27k, and the one I drove showed a sticker price of $31k with added options and Driver Confidence package.

This may be a hybrid vehicle but you don’t need to plug it in or run strictly on electricity. Rather, this is a gasoline powered car that uses electric motors to stretch its mpg’s. The Malibu Hybrid drives like you would expect; it listens to you and follows orders. Thanks to the electric motors, the Malibu Hybrid does have an extra spring in its step and pulls very nicely when overtaking trucks on the highway. The Malibu won’t be the butt of any slow hybrid jokes. It’s peppy and makes an almost-cute rumble when accelerating.

Teen Driver Mode Break Down
I waited to do research on this until after I had some seat time in the car. I had heard about Teen Driver last year but didn’t go into detail. The first thing I noticed is that the radio will not turn on until you have fastened your seatbelt. If you’re using Bluetooth to talk to someone hands-free it will not block the call, but any audio not relating to a phone call will not work until the driver’s seatbelt is locked into place.

Of course, the Malibu will constantly remind you that it is in Teen Driver mode so you don’t freak out when you notice that all the safety features are on and cannot be turned off. Traction control, lane assist, adaptive cruise control, pedestrian detection alert, blind spot monitor, forward collision alert, park assist, lane keep assist, are always on. This tech package is called ‘Driver Confidence’ (we call it Driver Incompetence – ed.) and adds $1,200 to the sticker price.

On the road, the Malibu drives normal until you try to change lanes without signaling. The lane-keep assist will try to steer itself back into your lane because it thinks you are not paying attention. First time this happened it caught me off guard and I thought I was in a Stephen King novel. This will teach drivers that they must signal before changing lanes to avoid a brief tug-of-war with the steering wheel.

If you like to tailgate, the Malibu will warn you that you are too close to a vehicle in front. If it feels that it does not have enough braking distance between it and the car in front it will flash a red light on the windshield warning you to slow down. Like to speed? The Malibu will send you a message on the dashboard letting you know that you are traveling over the speed limit. The Malibu is also limited to 99 mph.

It can sort of feel like you are driving with a parent who’s teaching you how to drive, which is useful if you’re new to driving, but can be annoying if you are already seasoned and have bad habits. I think this is a great feature to teach new or less confident drivers basic safety skills. The Malibu’s co-driver – we’ll call him Pavlov – trains you to fasten your seatbelt before setting off, signaling, and maintaining a safe distance – the foundation to being a good driver.

And here’s a benefit for parents. If your son or daughter is driving the Malibu Hybrid while in Teen Driver mode you can customize the car’s settings. You can set a limit on the radio’s volume for rock-n-rollers, and set a max speed limit to discourage lead-footing. The Malibu can also be a snitch by showing parents a report card of their teen’s driving. It will display distance traveled, maximum speed, and how many times a warning device was alerted. Thank god my parents did not have this when I was starting out.

Final Thoughts
This could be a trend setter if other manufacturers start developing their own Teen Driver modes for certain vehicles. The youngest drivers getting their license this year were born in 2000! That means they have no memory of a time before smartphones and social media. Having a car that can help parents teach them the basic skills and defensive driving is not only helping them but everyone they share the road with – us. Besides being a spacious, comfortable, fuel efficient hybrid, the 2016 Chevrolet Malibu shows that it wants to keep the future safe. And a quick shout-out to Pavlov…nice work.

Also, check out David Boldt’s look at the 2016 Malibu Sedan »
And check out Adam’s review of the 2016 Nissan Altima »
Check out more News and Reviews on Chevrolet vehicles »