The Nissan Armada was first introduced to North America in 2003. Built on the first generation Nissan Titan full-size pickup platform, it looked, drove and rode like the truck. In 2008 Nissan reworked the Armada, adding styling unique to the vehicle plus all-new interiors to make it stand out visually from the Titan truck. However, to many it still drove and rode like a truck.

Armada is No Longer a Barge

Many, including us, likened the ride, handling and performance of Armada to that of a barge. Well. we are here to tell you that those days are no more. The new 2017 Armada (now merged with Nissan’s legendary Patrol brand) has been transformed into a sleek, more powerful and comfortable land yacht, easily handling everyday activities in and around town, plus off-road family adventures equally well.

We recently spent the better part of a day near Carmel, California behind the wheel of a 2017 Armada – piloting it effortlessly on the freeways and country roads along and just above the coast. Quickly noting the improved handling, comfortable ride, quiet cabin and powertrain performance of Armada on the highway, we headed over to the off-road course at the Laguna Seca Raceway to see how the new Armada handled the lumps and bumps of the offroading.

‘Wow’ would be a good word to describe the ride. After sizing up the course on a first lap, we pushed the pedal to the metal on a second run – fairly flying over the terrain with just two wheels on the ground at a couple of points – and completing that run in half the time, with absolute confidence in the Armada’s capability at all points along the way.

Nissan has taken design and performance cues from the legendary Nissan Patrol to enhance the rugged performance of Armada as they merged the brands into a single vehicle globally for 2017. The second generation 2017 Armada continues to use the same body-on-frame construction, while upgrading materials and engineering for greater strength, better handling and a smoother ride.

From the outside, Armada is a bit longer and a little lower than the last generation, maintaining its powerful stance while adding some refinement and some updated features. Included are the Nissan signature V-motion front grille augmented by standard LED low-beam headlights with halogen high beams and LED daytime running lights. The Armada’s combination lighting at the rear includes LED taillights. 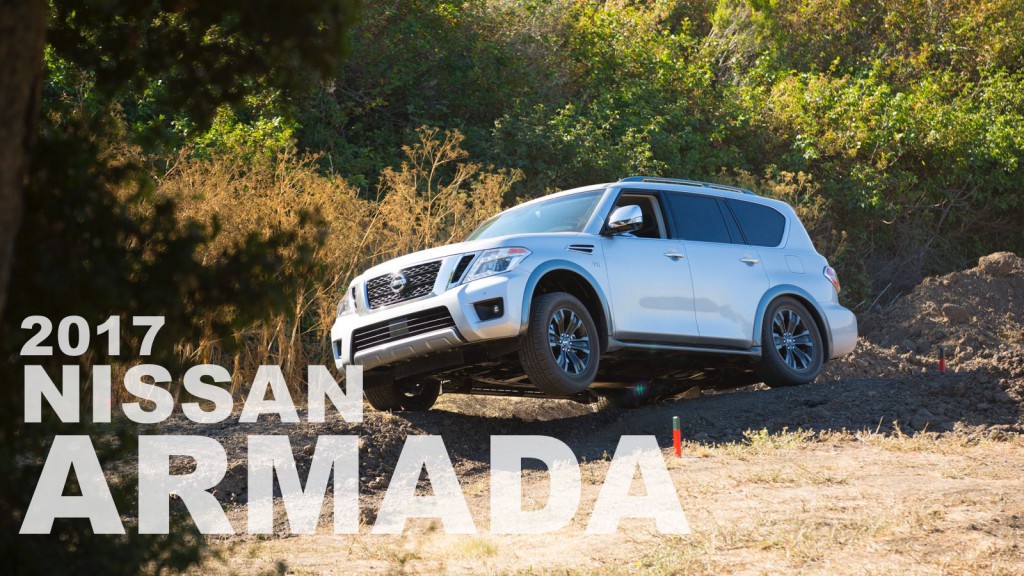 Perhaps the most significant change for Armada is its new powertrain. A newly engineered Endurance V8 has the same 5.6L displacement as the old, but now delivers 390 horsepower (up from 317) and 401 lb.-ft. of torque (increase from 385). The old 5-speed automatic transmission is also absent, replaced with new and advanced 7-speed automatic transmission with Adaptive Shift Control and Downshift Rev Matching.

As part of its adventure-ready capability, a 26 gallon fuel tank is provided to improve driving range (fuel economy has not been released yet), and the new Armada offers a tow mode and towing capacity of 8,500 pounds for both 4WD and 2WD models (when properly equipped).

Inside the ‘17 Armada has ample room for up to eight plus their bags and the related gear necessary for adventure. The standard seating configuration includes front 4-way power-adjustable buckets seats with large center console, second row fold flat 60/40 split bench seat and third row 60/40-split folding bench seat, which folds flat into floor for extra cargo carrying flexibility. Nissan says that the new Armada has best-in-class second row headroom and legroom with 16.6 cubic feet of cargo space behind the third row and 49.6 cubic feet behind the second row.

We were impressed by how quietly the new Armada goes about its business. The Armada features acoustic glass on both the windshields and side window glass, plus expanded use of sound absorption materials around, over and under the cabin. This library-level noise mitigation enabled us to thoroughly enjoy the standard Bose audio system.

Some of the notable technologies on the 2017 Armada include the (standard or available) parking sensors front and rear, a power liftgate with automatic close, heated mirrors with puddle lamps, remote engine start, rain-sensing wipers and deicer, footwell and stepwell lighting, Around View Monitor and intelligent cruise control with predictive forward collision warning and forward emergency braking.

Alexandria, VA – For a lunchtime preview of the new Armada, I’m about as far away from Carmel, CA as you can get in the continental U.S. without – of course – running into either Ben or Jerry. The Nissan event, held just off of the George Washington Parkway in Alexandria, VA ain’t Carmel, but then, it was Jefferson responsible for the Louisiana Purchase, not George.

Our brief drive confirmed everything Jim has written about the new Armada. And I’d emphasize his main point: there’s little left of the ‘truck’ in this body-on-frame SUV. And while not benefiting from a back-to-back comparison with the Armada’s Infiniti stablemate, the Nissan drives – at least subjectively – smaller than its QX80 cousin, while the Patrol-based Infiniti drives larger. Given a choice, we’ll take ‘smaller’.

Few will buy the base SV (at around $45K), and the Platinum’s $60K price point puts you close to an Infiniti showroom. We think the SL should prove the sweetspot – at around $50K. We’re looking for a long-term loan as this is written…