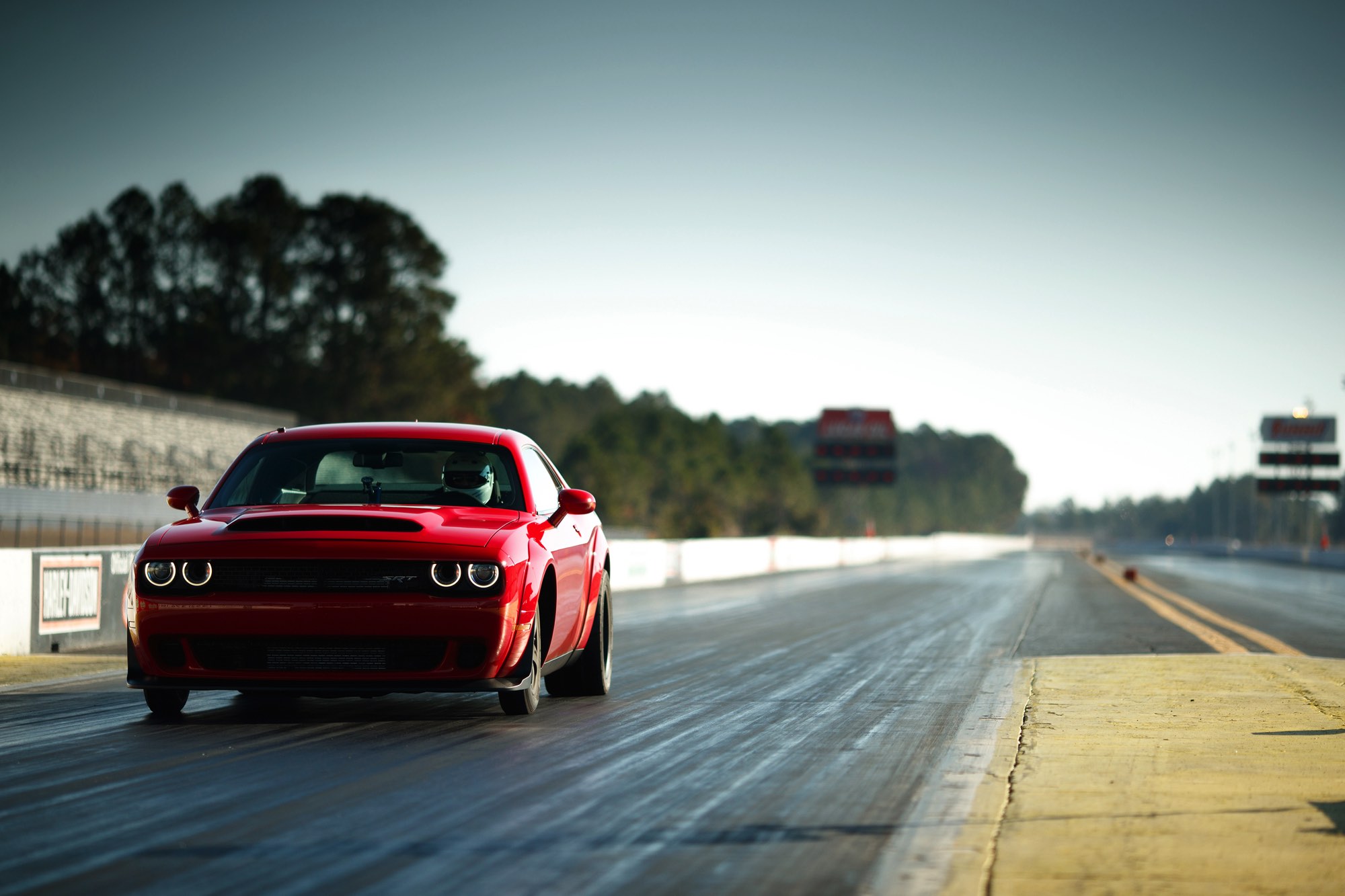 The new 2018 Dodge Demon finally debuted, and so far the hype has been meeting expectations. The drivetrain is a supercharged 6.2 Hemi that delivers 840HP and 770 lb.-ft of torque to the rear wheels. That means 0-60 in 2.3 seconds, and a ¼ mile time of 9.65 seconds at 140mph! The Dodge Demon is the first production car to lift its front wheels off the ground during launch straight from factory. Plus, it comes with a Demon box in the trunk loaded with speed parts to unleash the Demon off its chain (Demon Unchained?) when you’re at the dragstrip.

Dodge knows where the Demon’s home turf is and catered to it. That’s why the Demon can run on 100+ high octane unleaded or 91 octane on demand. You can also option for passenger and back seat delete to save weight. Don’t worry, you can buy back the interior for $1 apiece. It’s safe to say that the Demon is a drag car with license plates, unlike the COPO Camaro and Ford Mustang Cobra Jet, which are very fast from the factory but not street legal. The 1000hp Exorcist Camaro seems to be its main rival at the moment but that is just a GM Camaro that’s been modified by Hennessey. It is not a factory-tuned drag car.

You know the old saying, Those who do not learn history are doomed to repeat it? It’s a quote from Spanish philosopher George Santayana, whose original quote reads, Those who cannot remember the past are condemned to repeat it. It’s a phase that can feel relative just by watching the news. This quote is what inspired this article.

What the Dodge Demon is (or can be viewed as) a nostalgic reminder of an era in automotive history that many millennials may not remember, or have even heard of. In the early 1960’s there was a war for brand supremacy. The mission: see which manufacturer could set the fastest quarter mile time in their factory-tuned specials. A brief moment in auto history where winning a drag race meant bragging rights and sales figures. A time when drivers had to tape their left hand to the wheel to keep the car straight off the line. Back when factory drag cars were real monsters that were only civilized standing still and turned off. When race engines were fitted into stripped out sedans and sold to the public just so they could qualify to race in the NHRA Stock and Super Stock class (S/SS).

The Ford Fairlane Thunderbolt, Chevrolet Impala Z11, Pontiac Catalina Super Duty, and Hemi Dodge / Plymouth A990 were all contenders in the NHRA S/SS war. Each car was street legal, technically, but by no means were they built for daily duty. These machines were built to go fast in a straight line, or bust. These were the Vikings of the NHRA Super Stock class.

Named after an experimental concept from Ford, the Thunderbolt was fitted with a high rise 427 big block used for the Ford Galaxie in NASCAR. Only 100 were made, 49 fitted with 4-speeds and 51 with heavy-duty automatics.

To save weight the Thunderbolt was stripped of its:

Hell, they even removed the passenger side windshield wiper!

The front seat was either from Ford’s police package or taken from an Econoline Van. The body itself was modified to make it a featherweight brawler. The hood, doors, and front fenders were made out of fiberglass before switching to aluminum in later models. Early Thunderbolts even had fiberglass bumpers and Plexiglas side and rear windows. The high beams were removed and replaced with mesh.

The Thunderbolt won the NHRA Super Stock title for Ford in 1964. Most recently, in 2011, a Thunderbolt was fitted with modern slicks and was able to run 9.23 seconds at 151 mph! (Take that, Demon…)

Horsepower: Underrated at 425, actual number is estimated at 600hp or more.

During the time when the Impala SS with a 409 was one of the hottest cars on the market, GM decided to double down. Rumors of a “mystery engine” started to spout on the grapevine and making Ford and Chrysler nervous. The mystery engine was a 409 that had been bored into a 427.

Similar to the Thunderbolt, the Z11 was all go and no show. No standard options except a tach and a dog-leg shifter. Aluminum made up the front and rear to shed 300 pounds of bulk. This was the first GM car to be fitted with cowl induction. Experts say only 57 Impala Z11 were made and just 7 survived. Horsepower was “rated” at 430hp; good enough to get across the ¼ mile in 10.8 seconds. To get the Z11 to hook up during launch they fitted soft springs in front and a ladder bar in the rear. They wanted the Impala to lift its nose up to smash the rear into the ground for better traction. They even painted the undercarriage and suspension white to deflect heat and make it visibly easier to work on.

Horsepower: Underrated at 430hp, actual number is estimated between 525- 650hp depending on the source. 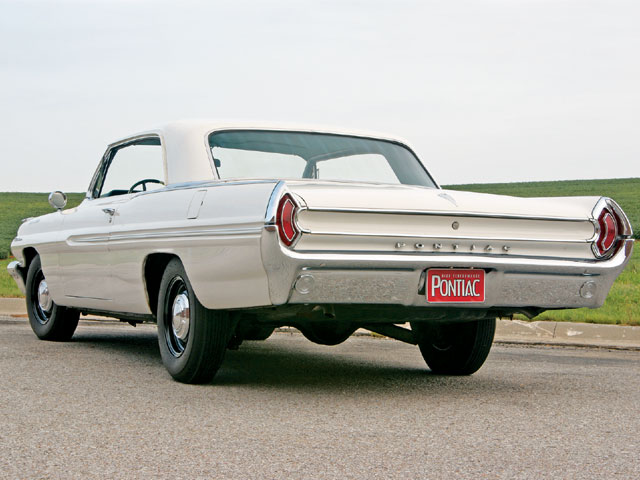 What do you get when you stuff a NASCAR engine in a luxury vehicle? The Catalina Super Duty. Powered by a 421, often mistaken for a 427, it was the golden boy for Pontiac in ’62. What makes the Catalina different from the other super stockers is that you could order it with (some) options. However, no automatics were offered in the Super Duty because the transmission couldn’t handle the 421’s torque haymakers. You had a choice between 3-or 4-speeds manuals. An aluminum front end, bumpers, and radiator brackets help shed 200 pounds. Total production number, at its peak in 1962, was 178.

In 1963, Pontiac built 11 “ultra-lightweight” Super Duty cars with holes drilled in the frame rails calling them “Swiss Cheese” Catalinas. That shed another 110 pounds off its chassis. If you’ve ever seen an early 60’s Poncho Catalina you know… their freaking boats! They make modern Challengers look slim.
Horsepower: “conservatively rated” at 405hp, actual number is estimated at 460hp.

The Granddaddy to the Demon in many ways, the A990 was Chrysler’s response to the Super Stocker wars in 1964. They took a 426 Hemi and added some special features: aluminum cylinder heads, forged pistons, copper head gaskets, aluminum oil and water pumps, aluminum alternator bracket, and a magnesium-cast cross-ram intake manifold. Fuel was fed through duel Holly 4 barrel carbs to crank out 425 horsepower. Total production number of the A990 was 360, with 200 branded as Dodge and 160 as Plymouth.

Like the others, the A990 had an aluminum frontend and van seats to keep it light. This version of the 426 Hemi would later go on to become the “street Hemi” we all know and want. The 1966 Dodge Coronet was the first Mopar to be chosen with a daily-driver Hemi engine on its option list, backed by a 90-day warranty. The rest is a history still being made today with the 2018 Dodge Demon.

What the Super Stockers did was give manufactures experience, which came in handy when people started demanding muscle cars that could actually be used as daily drivers. The muscle car era started with these quarter-mile warriors. The desire to buy cars with way too much power is still alive more than ever, so it’s important that we don’t forget our history.

My favorite thing about these ultra-rare factory race cars is the warning labels they had. Remember, these cars were perfectly street legal, but that’s like saying a tiger can be a house cat.

The A990, for example, had a sticker in the glove box that read:

This model is intended for use in supervised acceleration trials and is not intended for highway or general passenger car use.

Ford had a similar stamp on the Thunderbolt that read:

This vehicle has been built specially as a lightweight competitive car and includes certain fiberglass and aluminum components. Because of the specialized purpose for which this car has been built and in order to achieve maximum weight reduction, normal quality standards of the Ford Motor Company in terms of exterior panel fit and surface appearance are not met on this vehicle.

This information is included on this vehicle to assure that all customers who purchase this car are aware of the deviation from the regular high appearance quality standards of the Ford Motor Company.

Both seem a bit wordy for basically saying, “Don’t be a moron, this is a drag car with turn signals.”

So, is the 2018 Dodge Demon a modern day Super Stocker? I think so. Are we in the beginning stages of another brand supremacy war at the drag strip? I hope so. I was born too late to witness the first one. All Ford needs to do is stuff about 900hp into a Mustang and call it the Saint or the Archangel and we got ourselves a pun-filled quarter mile battle!