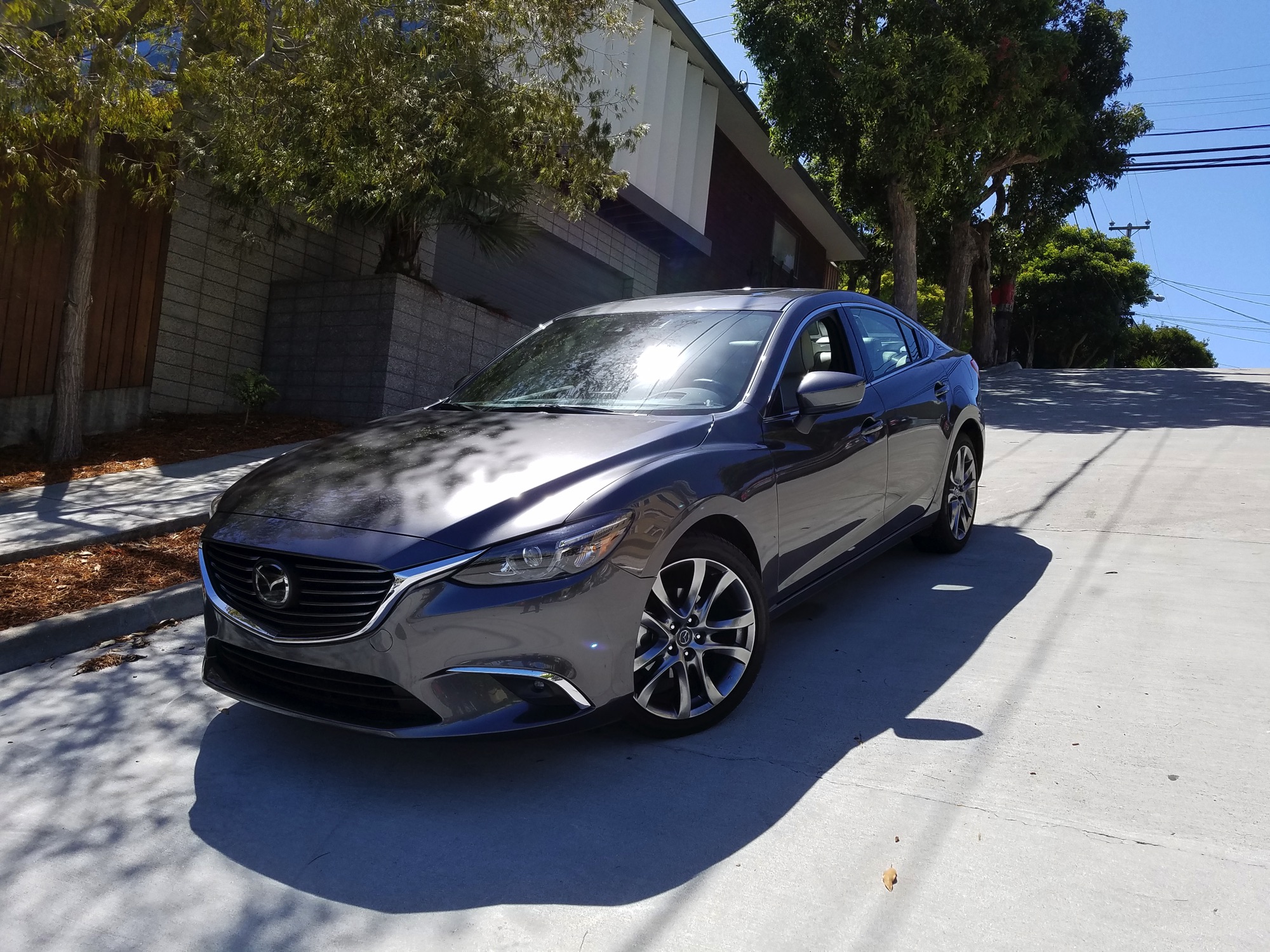 Pacific Coast, Highway 101 – This whole review/road trip started because two guys from Canada invited me to a navigation rally in Portland, called the Gambler 500. Rather than fly directly I figured why not take advantage of the opportunity. Explore the West Coast, take the scenic route, and greet the Pacific Ocean while listening to California Dreaming.

Highway 101 was the ideal road to take. Now I just needed a car, a vehicle that would not only get me there on time but also add to the experience of driving across northern California and Oregon. That means it needed to be comfortable, handle sharp turns, and not drink its weight in fuel. I was glad when Mazda called me back to tell me they had a 2017 Mazda6 waiting for me at San Francisco International.

Traditionally, the Mazda6 is the senior to the Mazda3. An upgrade for young drivers when they start earning commas in their pay checks feel they’ve outgrown the small economy car, and want more wheelbase and room. It’s the same situation for the Corolla and Camry, Civic and Accord, Focus and Fusion, etc. Only now size doesn’t matter in terms of options. A top of the line compact can have the same options as a midsize, and crossovers have wedged their own market in-between them. That means a car buyer is left to their own wants rather than needs. Basically, it doesn’t matter if they prefer the look of a sedan over a crossover because both offer Bluetooth, moon roofs, and ventilated leather seats.

EXTERIOR: I remember the shuttle driver at the airport asked if the Mazda6 was a BMW. Granted, he was being friendly out of habit from working 37 years at the airport, but part of it was a compliment to the car itself. The 2017 Mazda6 is a handsome looking car. The sculpted body allows it to stand out from other shapeless sedans in its class. This body design was carried over from the 2016 model with very few changes.

When I picked up the car it was at an airport parking lot with valet service. It was sitting among Porsche Panameras, Jaguar XE’s and Land Rovers, yet the Mazda6 didn’t look out of place. Finished in Machine Gray Metallic, the Mazda6 looks as modern as a Chicago skyscraper. It’s like James Dean – it doesn’t desire to look cool, it just does.

INTERIOR: Inside the 2017 Mazda6 is Parchment Nappa Leather, giving the car an upscale feel. It’s like the Mazda6 is punching above its social class and giving you more for your money with a luxurious finish to the interior. Everything looks like a redone kitchen that switched from wooden cabinets and Maytag white to stainless steel and marble. All interior components feel crisp and well made. Push button ignition awakens the Mazda6 to greet you. The massive trunk space could rival most full-size taxis, or San Francisco studio apartments. The best part is that you can get a 2017 Mazda6 – admittedly a lower spec Mazda6 – with a 6-speed manual. Kudos to Mazda for that.

As I mentioned earlier, I had a destination to reach and a lot of ground to see. In order to have my cake and eat it too, I had to drive 9-11 hours daily, spending each day exploring the two lane blacktops of Highway 101. In all those hours of driving I never once complained about back pain or stiff knees. I enjoyed the fact that I could control the infotainment system with a knob in the center console without lifting my elbow off the arm rest. Adjustable lumbar support, Bluetooth hands-free connectivity, and satellite radio kept me on the road without getting bored or fatigued.

PERFORMANCE AND SPECS: This trip would have felt like work if the Mazda6 did not perform like a Mazda should. When you see a road sign that shows an arrow doing an impression of a snake you need a car that is fun to drive. Anything short of fun will ruin the experience; like burning a prime cut of beef or mixing 20-year old scotch with RC Cola – a total waste of a good thing.

The Mazda6 came with a 6-speed automatic and paddle shifters at the wheel. When the road started to slither I flicked the Sport Mode switch on the center console and extended my fingers at the wheel to change gears. Some cars put paddle shifters as an afterthought. You can tell when you reach for a gear and feel that short delay of a computer double checking your work to see if it is safe to shift before the car actually changes gear. I hate that. Thankfully, driving matters at Mazda HQ. Gear changes are instant as they obey your command without hesitation, allowing you to use all 184 horsepower from its 2.5 liter four cylinder engine. (It’s the only engine available on the 2017 Mazda6.)

The Mazda6 is not a small car but it has sport tuned suspension and snappy steering that allows you to hang on through the tight turns. It won’t wash out and understeer you into a tree. There were times when I felt that the car was going to lose grip but all I had to do was turn the wheel more and ride the wave. It’s a fun sedan to drive. Downshifting into 2nd gear, throwing it into the turn and feeling the FWD pulling me through the apex made the drive feel like an adventure. Sure, it wasn’t a sports car or vintage convertible, but I was still grinning at the end of each day while averaging 32 mpg!

Pricing for the 2017 Mazda6 starts as low as $22k for the entry-level Sport trim and can jump into the low 30’s for the top of the line Touring and Grand Touring models. The Mazda6 I tested was stickered at $34,530, thanks to options like Mazda’s GT Premium package. This package included the Nappa leather interior, rear heated seats, LED interior lighting, grille shutters to improve fuel economy, and regenerative engine braking, which reduces the engines need to burn fuel while braking.

IT NEED A TURBO: The 2017 Mazda6 is a fun driving, stylish, safe family sedan that can be purchased or leased for under $25K. I had to really nitpick to find something I did not like about the car. For instance, the horn, dare I say it, is too loud. Setting the alarm on the Mazda6 made me jump the first time I heard it. Seriously, the honk that tells you the car is locked will echo in your ears if you are in front of it when you beep it.
My biggest issue with the Mazda6? I wish it had more power. A car that looks this good should be quicker on its feet. Having only 184 horsepower to play with is not enough, especially when other sedans in its price range (Hyundai’s Sonata, Kia Optima) come with turbos that crank out nearly 300 hp. The Mazda6 felt underpowered on both straights and steep mountain roads, where I had to keep my foot down to maintain highway speed. Admittedly, it might not be as noticeable with a manual transmission. Also, the long front overhang means that it will hit and scrape on steep driveways, so watch out!

Other than those subjective issues there was really nothing bad I could say about it. The Mazda6 went wherever I wanted to go without complaints. Even on easy off-road trails in Redwood country, I was able to pass Subarus and Jeeps.

To sum up my time with the 2017 Mazda6: I spent less than $120 on fuel during the entire 1,700-mile journey and felt more exhausted getting off a 2-hour flight than pulling over after a 10-hour drive.