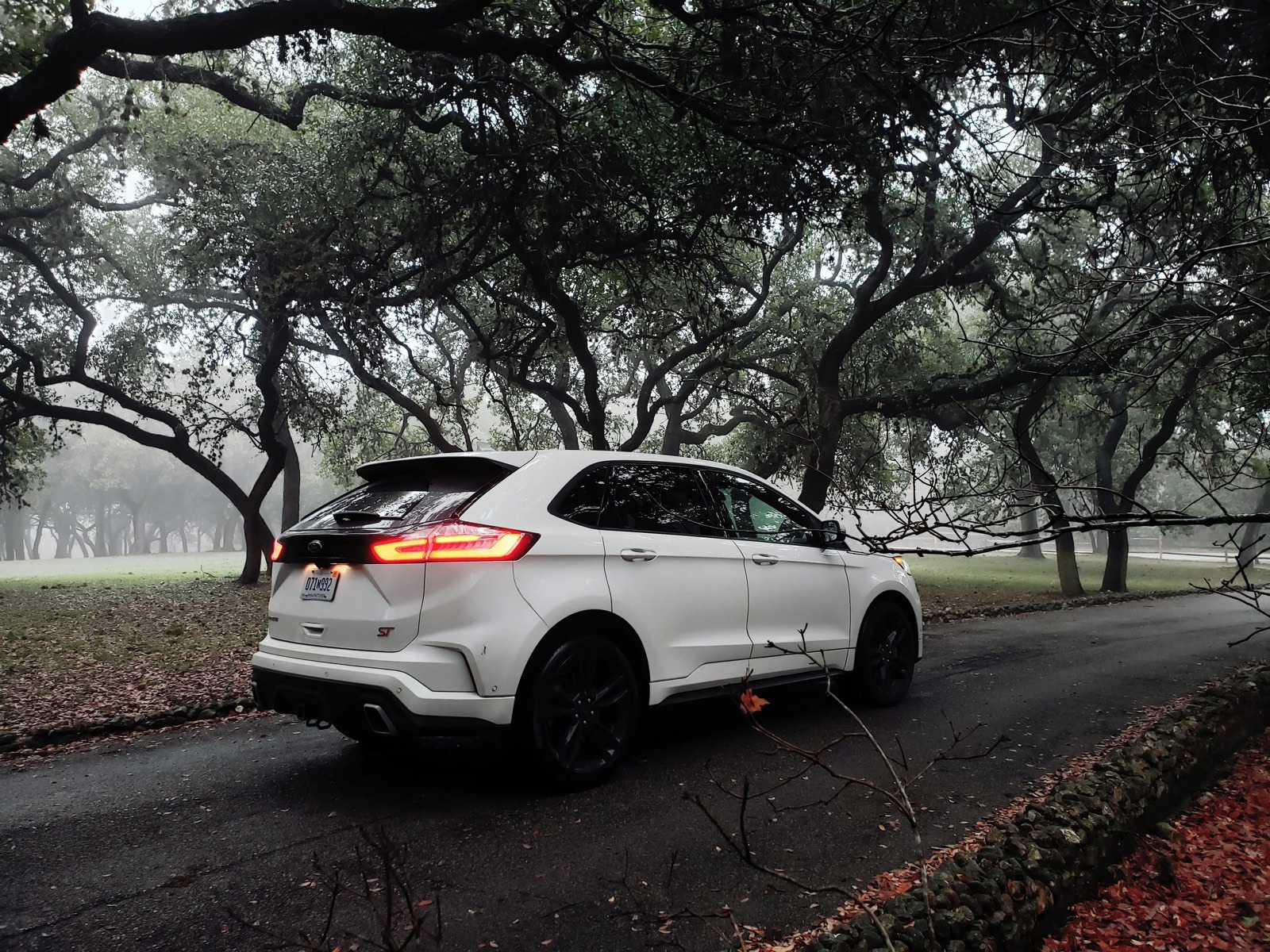 Comfort Gets a Boost

The Ford Edge ST is a performance crossover more affordable than premium, performance-based SUVs, while staying reasonably true to its mainstream status as a commuter vehicle. That duality offers a double-edged sword, trying to balance itself between an ST badge on one end…and child seats on the other.

I first reviewed the 2019 Ford Edge ST one year ago (give or take a month). I was originally not impressed with the Edge ST, largely because I didn’t understand its purpose. I posted my review and over the past year I received a number of comments for my critical take on Ford’s performance CUV. It turns out there are people who absolutely love the Ford Edge ST and defend their choice of transportation like a true brand loyalist. Its popularity is dwarfed by sister models like the Mustang and F-150, but its niche – and the enthusiasm for that niche – is real.

I had one internet commentator call me a liar when I posted a video of the Edge ST acceleration time, accusing me of not testing a real ST. I was then accused of sandbagging and not driving the Edge ST to its peak performance. This was the first case where I saw people defend a crossover SUV with the same passion often seen in pickup truck rivalries and supercar spec debates.

EXTERIOR: This 2019 Ford Edge ST sported white platinum metallic paint, and came equipped with Ford’s ST Performance Brake Package – a $2,695 option. Bright red brake calibers peek from behind a set of 21-inch blacked-out aluminum wheels, giving the Edge ST a hint of flare along with its ST badge on the right corner of its blacked-out grille. I still maintain that the Edge ST looks like a hot hatch that’s put on marriage weight. It’s a husky midsize crossover that never feels too big for its wheels. It somehow looks big and small at the same time.

INTERIOR: The Edge ST has one of the largest dashboards I’ve ever seen. Acres of real estate is perfect for ball caps, fast food wrappers, small toys, and all the miscellaneous life can bring. I asked the internet if the ST emblem on the Edge’s ebony leather and suede interior would look better in red. The test came to a draw, but I still think a little red would have been a welcomed distraction to ebony’s monopoly in the Ford Edge ST’s interior.

The seats are excellent in that they offer a hybrid between luxury and sport, with a bias toward comfort. The panoramic sunroof offers views for both front and rear passengers and does add a slice of luxury the same way a view does to a corner office. This model came optioned with a $5,585 equipment package that includes features like heated seats for both front and rear, wireless phone charging pad, adaptive cruise control with lane assist, and the panoramic sunroof.

PERFORMANCE: Powered by a twin-turbo 2.7 liter EcoBoost V6 engine and 8-speed transmission, the 2019 Ford Edge ST will hit 0-60 in 5.7 seconds. That might seem slow compared to today’s norm of 0-60 in under 3 seconds, but for a five-passenger crossover it’s pretty good. It’s fast enough, thanks to its 335 horsepower, which will no doubt be the first thing you mention when someone asks with the “ST” badge means.

The larger wheels do affect the ride quality at low speeds, especially over speed bumps. The Ford Edge ST has undisruptive acceleration thanks to its 8-speed transmission delivering the power in a smooth constant fashion, and it won’t alert passengers that you’re quickly reaching triple-digit speeds. The performance brakes increase the brake rotor size for improved stopping power; they can shut the gate on your speed in a hurry when needed, while not being overly sensitive under normal driving conditions. Sport Mode is noticeably different as it tenses up the suspension, holds gears longer, and sharpens throttle response. I had fun engaging Sport mode when I needed to overtake a semi on the highway or tackle the dawn of rush hour.

Suspension on the Ford Edge ST has been tuned to handle over 330 horsepower spinning through its all-wheel-drive system. The springs, both front, and rear, are stiffened, while Ford fits a stronger anti-roll bar to reduce roll under hard cornering. The Edge ST also gets upgraded suspension struts with added monotube dampers to the rear multilink setup. All this means the 2019 Ford Edge ST handles a lot sharper than its lower-trim level Sport and SEL models, although even with a tuned suspension the Edge’s weight does make it feel sluggish in the really tight corners. Also, the EcoBoost exhaust note is tame for a performance SUV. And fuel efficiently wasn’t great with an average just 21 mpg, giving an estimated highway range of 460 miles.

FINAL THOUGHTS: The Edge ST is an enhanced crossover that delivers stealth acceleration while maintaining comfort for its passengers, and provides enough cargo space to load a weekend’s worth of camping gear. People will sometimes do a double-take, thinking that it may or may not be an undercover police SUV. I still maintain that the exhaust should have more baritone in its voice. This second look did show me the practicality the Edge ST offers in creating a true compromise for the type of person that needs a crossover, but wants enough power to surprise the Alfa Romeo Stelvio in the passing lane.