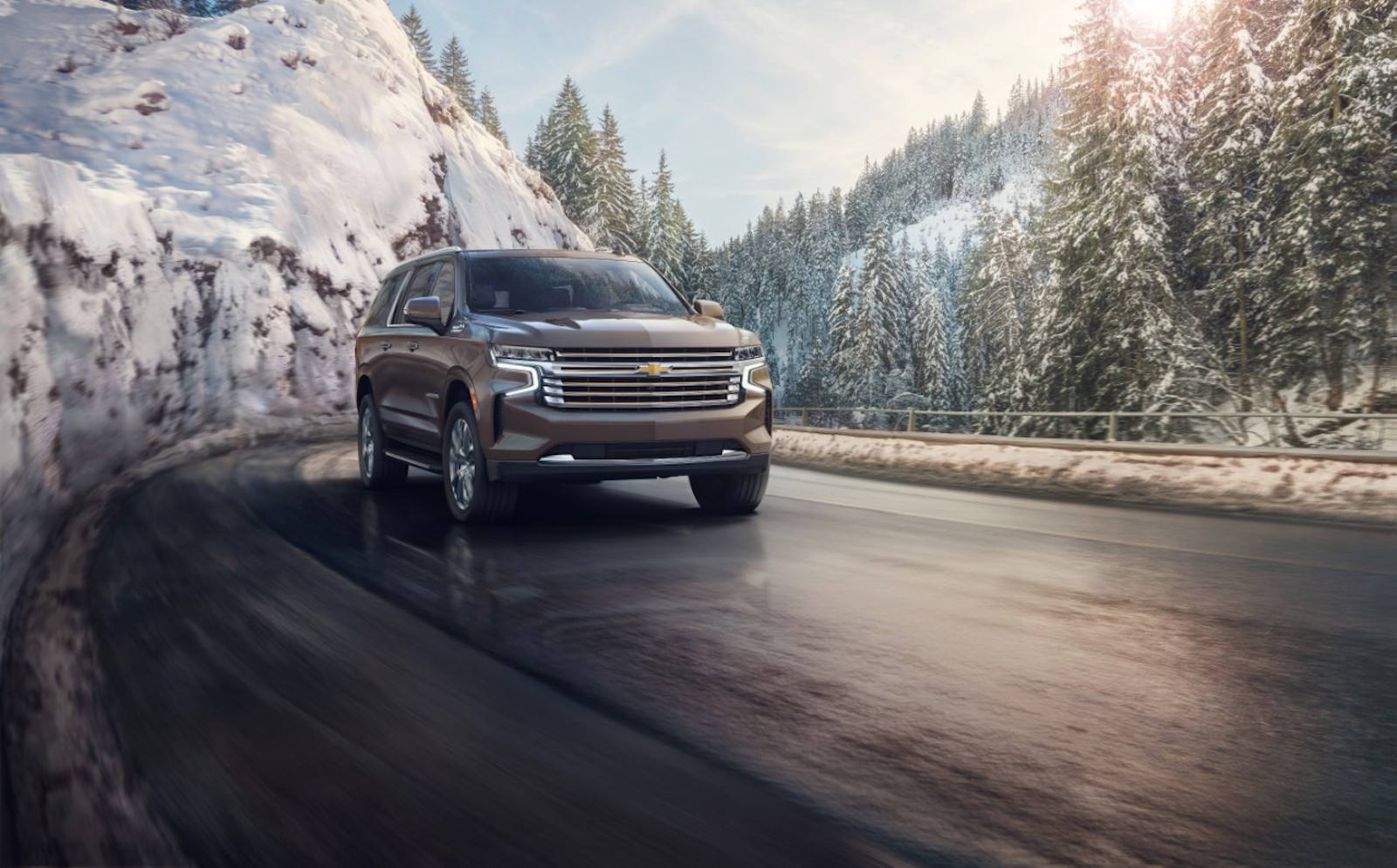 “Are we stayin’ home, are we goin’ downtown?
Are we dressin’ up baby, or dressin’ down?
Oh, whatever, baby, I’m with you.”
-Delbert McClinton “I’m With You”

Last week, I wrote that I haven’t owned or even driven a Chevy Suburban in seven years. (see Part 1) So I’ll confess that when a brand new 2021 model appeared in my driveway, I was both delighted and intimidated. It was beautiful, but it looked huge from the outside. And even larger from the inside.

The exterior was a color Chevrolet calls Greywood Mettalic. The interior was a combination of black and mocha leather, and was beautifully executed, right down to the trim; maybe a tad subdued for my tastes, since I lean toward brighter colors, but stunning nonetheless. Heck, I don’t even own furniture this nice!

Backing it out of my driveway onto a relatively busy street – even with the back-up camera system on and showing the way – was a challenge the first time around, although it got easier as my week went by. But once I dropped it into Drive, headed east toward I-35 and hooked a right at the traffic light it all started coming back. The 747 of the Highway was in its element – the Suburban was big, but it was big for a reason.

Glancing around the cabin interior, lots of things were new, but the basic welcoming layout was still there. I could find my way around, even though much had changed.

For starters, in the latest Suburban you don’t actually “drop it” into gear. Instead, you pull a switch on the dashboard to engage the transmission. It’s not a push-button transmission, like the ones made famous and fashionable by American Motors automobiles in the 1960’s; instead it’s a pull-button transmission. Except for “Park” – for that you push the button into position. Presumably, you do it this way so that you don’t drop it into Park by mistake. (It’s not that this vehicle would present a lot of opportunity for that to happen.) You get used to this way of changing gears, I suppose. But personally I don’t really like it. It seems awkward.

That transmission quirk aside, once you begin to accelerate the 6.2L engine this Suburban came equipped with you’ll never touch the “Drive” button again. The 10-speed automatic transmission takes it from there. There is a “Low” button as well as a “Drive” button, with separate + and – choices for “Low”.  This seems kind of crazy, or maybe I just prefer not having to look at a big button gear selector in order to change gears. Shifting gears, like breathing, is just something I believe you should do naturally.

The Suburban’s acceleration is good, although there’s no hiding the fact that you’ve got all those gears working. Nevertheless, it all comes together smoothly, engine output matching gear selection – and you’re just motoring along after that. The transmission shifts gears but it doesn’t hunt for them. It knows where they are and when to engage them. After a while you know what to expect, and the powertrain combo delivers that expectation.

The cabin gives you a nice mixture of old and new. Digital read-outs, including a heads-up windshield speed display that isn’t annoying to the driver. It’s just there. It informs, without distracting. Knobs adjust the temperature fan, the volume level, and even select a new radio station. While that seems to many to be a little old-fashioned, it also means that you don’t have to divert your attention away from driving to make simple adjustments. Your hand finds the controls easily and you just twist the knob left or right to get the station you want, change the volume level, or adjust the temperature or fan speed. Sure, it’s nice to know the temperature on your side is 69 degrees, and the passenger is maybe 2 degrees warmer or cooler. But in the end, you just want to be comfortable. Dial it up, dial it down.

The in-dash display screen is an excellent size as well. And it’s at the right height; not intrusive, just informative. And it switches between displays a couple different ways. While the display is not as intuitive as I had hoped for, it’s easy to learn and work.

The wiper controls are on the left turn stalk; there is no right stalk at all, although I kept looking for one. In the end, everything you need is there somewhere…you just have to find it. My personal approach to learning any new vehicle (and every vehicle is different) is to find a large parking lot at night, and master every button and control that you see lit up inside.

ALL FOR ONE!  AND ONE FOR ALL?

THE HIGHWAY SUBURBAN: Once on the highway, the Suburban knew its job. Whether sitting still, stopped in the famously ‘worst stretch of highway in Texas’ during the daily rush hour, or rolling along non-stop between Austin and San Antonio, the Suburban is purpose-built for the long haul. Or the boat haul or the trailer haul. It’s like rolling down the road in the comfort of your living room. Lots of room. Expansive views forward. And with the large sunroof glass open, it’s flooded with natural light.  It owns the highway, where most vehicles just lease it.

THE CITY SUBURBAN: Austin can be a nightmare for any vehicle these days, but especially large vehicles. We’ve installed curb cuts at most intersections for greater individual access. We have brand-new protected bicycle lanes that have rows of vertical steel posts, to better protect cyclists. But those addition to the roadways has also reduced overall lane capacities throughout the downtown areas, and beyond.

The easy ability to making turns in vehicles has essentially disappeared on many streets, due to some of these changes. Then there’s the ever on-going high rise construction projects dotting the downtown landscape, all of  which reroute traffic.

Plus, there are single length buses and double length buses to maneuver around, bicycles to watch out for, traffic signals that are new, and ‘improved’ parking which in many busy areas is now back-in only. And that doesn’t even mention more and more restrictions in and around the Texas State Capitol complex.

So just how well did the Suburban do in the city? Well, once you understand that somehow the GM engineers have made the Suburban appear larger on the inside than it is outside, you just drive it, like anything else. You sit up high, enjoying visibility that’s excellent. You master the vehicle, it doesn’t master you. It’s there to do its job and you’re there to do yours.

THE SUBURBAN IN SUBURBIA: Where the Suburban really shines, of course, is in its utility. It’s an SUV after all – utility is its middle name. Whether hauling adults, kids, pets, hay, sofas, supplies, large packages or just getting groceries, it swallows everything with a bottomless appetite.

The two (back and middle) rows of seats in my test vehicle dropped flat at the touch of a button. Captains chairs in both the front and middle rows meant that seating is limited to 7 people, including the driver. Comfortably. And there’s room for furniture or camping gear in the cavernous area back behind the 3rd row.

While the color combination did not initially appeal to me, it immediately appealed to the women in my life. They loved it! And even I began to appreciate the richness of both color and textures over time. Maybe everything doesn’t have to be bright colors. But I’d probably still get one in Candy Apple Red. What’s an extra $500 for special paint on a vehicle you might have for the next 20 years. Or more.

That wide-open sunroof brings light into the entire vehicle nicely. It’s like being outside when you’re inside. The console between the driver seat and the front passenger seat is a box large enough to fit my entire order of fresh seafood – and some ice to keep it cold – for 4 hours.

To accomplish all of this of course, requires a version like I drove. All spec’d out, and priced to match, at around $84K. It had power everything but a toothbrush. But it had an outlet for one!

The good news is that you can get a new 2021 Chevy Suburban for just over $50k, and that’s not bad in today’s market for a real SUV. You won’t get all the bells and whistles I had in my test vehicle for that kinda’ money, but you can still get a nicely outfitted Suburban that will do the same jobs, but with a little less luxury. And that’s a good thang.

Finally, the day before I had to return my press vehicle I started out for a quick run to Costco. But on that 12-mile trip I found myself diverting at the last minute. There were still nearby country roads to be explored, a couple small towns I hadn’t seen in years, and the weather was fine. So I blew off Costco and just drove and drove and drove some more. I didn’t want to turn it back in. I just wanted to drive it. Anywhere.

In all the years I have set-up press drives for different manufacturers, I knew when I had the right combination of roads and  scenery and traffic to finalize a drive route. And when I had finalized a drive route, even though there were quicker ways back to my hotel, I didn’t take them. I always drove the drive route instead.

A good drive route remains, in my mind, regardless of which vehicle you’re introducing, right around 300 miles of driving in a single day. Whether that’s in a Chevy Suburban or an Aston Martin, it’s the same. You need time to learn the vehicle. The right vehicle and the right combination of roads. And every great vehicle has a song that comes to mind at some point when you’re driving it, whether you want it to or not. Maybe it’s playing on the radio. Maybe it’s replaying in your head from another source. It just fits. When you hear it, and it sticks, that’s when you know you’re in love again.

The 2021 Chevy Suburban is no exception. Here’s to you, Baby!

“Are we stayin’ home, are we goin’ downtown?
Are we dressin’ up baby, or dressin’ down?
Oh, whatever, baby, I’m with you.”