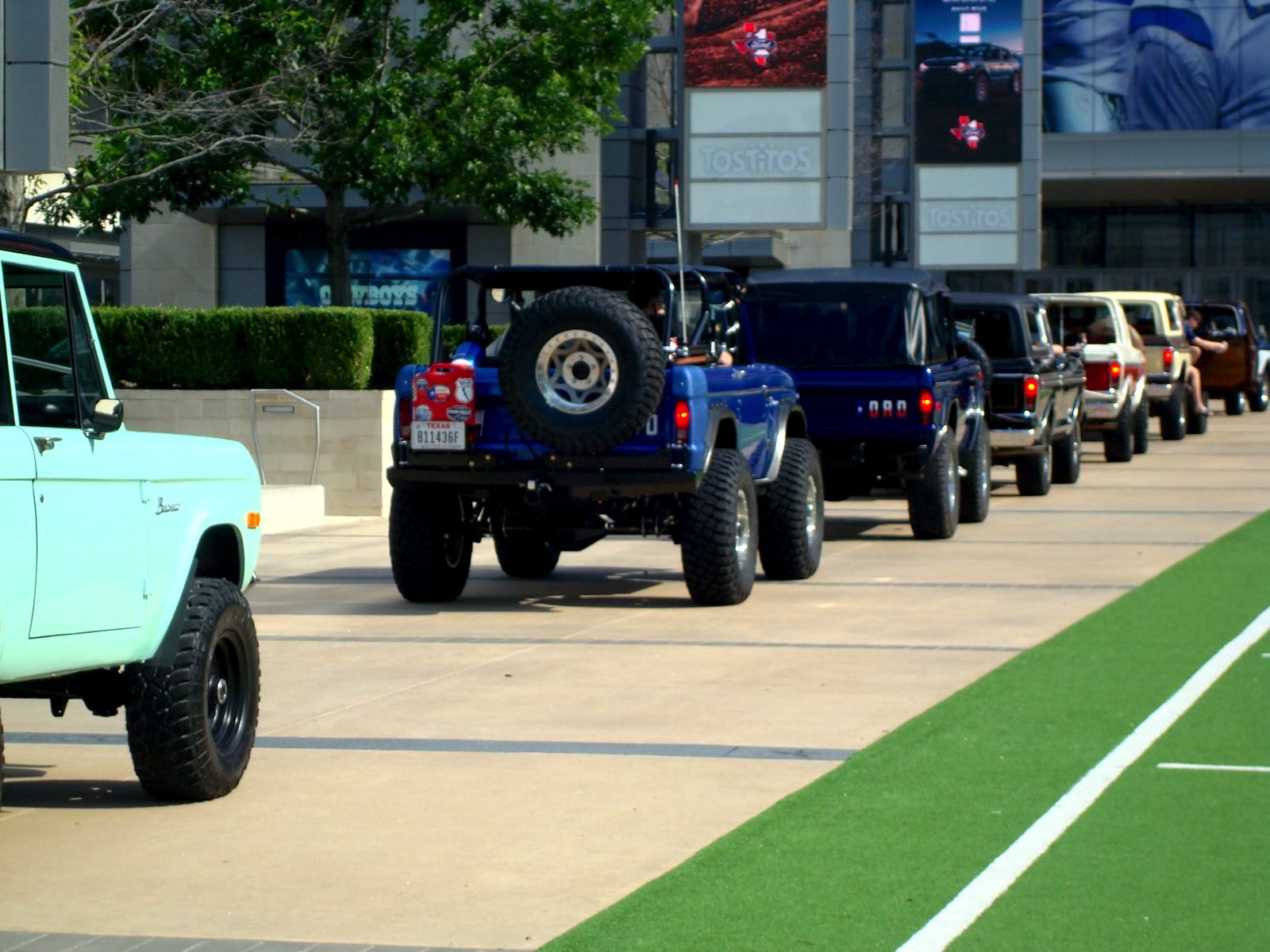 Nothing goes better in Texas than Broncos, Ford trucks and lots of Cowboys. Last week over fifty Ford Broncos, from vintage 70’s to a 1996 model, were on display around the Dallas Cowboys’ Frisco Star.

The number of Bronco fans that turned out suggests Ford will have no trouble selling them as fast as Ford can build them. The only question: Will people wait long enough to get one. I’ve attached photos of the Classic Broncos that came to the event, and there were almost too many. Fortunately, they managed to fit them around the Tostitos Championship Plaza.

Ford brought two 4-door soft-top models, and demonstrated how easy it is to pull the top back like a convertible. They also had a series of demonstrations on removing the Bronco doors, using its own tool kit with the Bronco logo on the tools. To take the door off requires removing two screws and disconnecting the wiring plug – very simple. They also give you a bag that you slide the door into to prevent damage, and then you can put it in the back and strap it down.

On display Ford also had a Bronco Sport 4-door in white, but the big news is the full-size Bronco will be available with 300 horsepower driving to all four wheels via a 10-speed transmission, and also will have the Bronco G.O.A.T. (Go Over Any Terrain) drive modes. The Ford display included gas cans painted in the colors that the Broncos will come in, giving us an idea of the available Bronco palette. There is no question in the minds of the Bronco experts giving the demonstrations that they have thought of every detail, and the new Bronco will be a strong competitor for Jeep. Again, the only problem is in trying to get one. The current Bronco Sport is difficult to find, while the new 2-door and 4-door Broncos are scheduled to arrive in maybe four months. But with the chip shortage chances are it’s going to be like six or more months. While we were at the event, I met several customers that had put deposits down on the 2-door Bronco. The Bronco will be available with a wide range of Built Wild accessories.

I purchased a new Bronco Sport myself, and it is a great off-road vehicle which fits in the garage; for me, a truly novel idea. It drives well, offering an 8-speed transmission with 1.5L EcoBoost engine, and gets great mileage. I’m getting 22 to 25 miles per gallon around the city and can tow 2,000 lbs. with a Class II trailer tow package. It is very comfortable inside, offering an 8-inch infotainment screen, SYNC3® and APPLINK®.

The most impressive part of the new Ford Bronco is the 40-year history that customers still collect and treasure today. Of course, if you look at the market for the early Broncos, these vehicles sell for the $40,000 to $50,000 range – and if you’re lucky enough to find an original Baja Bronco by Bill Stroppe you could pay as high as $70,000 or more.

No question this all-new Bronco is going to be a big winner for Ford. When I shopped for the Bronco Sport I bought I had to visit three different dealers to find one in stock. If you’re thinking of buying either the Bronco or Bronco Sport get your order in early and be patient. And when you do get it, drive safely out there.