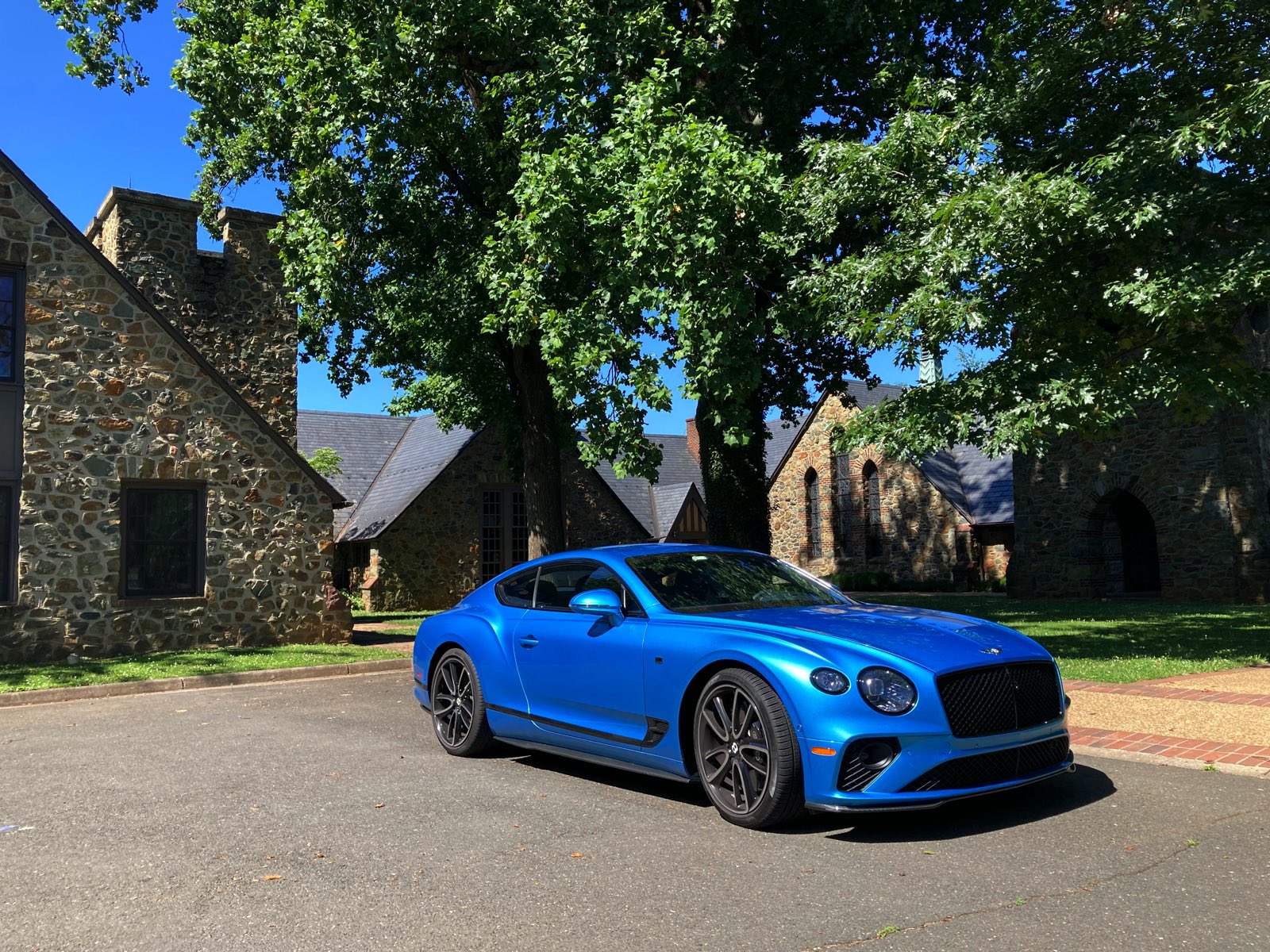 In what I laughingly call a career, now ‘solidly’ in its third decade, there have been a few cars – along with a few trips – that remain fully embedded in my otherwise fading memory. And among the cars, one of the most vivid is Bentley’s Continental GT. Around 2004, a small group of journalists drove a handful of Bentleys in a lap of south and central Texas. Bentley PR exec John Crawford was our host, and racing legend Derek Bell took the right seat. It was proactive PR, and in the wide-open reaches of Texas the 2-day journey spoke perfectly to the Bentley’s pace, grace and – not incidentally – space.

The new coupe’s Continental tag was notable. It recalled Bentley’s Continental R, a slippery 2-door launched in June of 1952. Britain had won the war, Liz had married Philip, and while its colonies were pursuing independence, Bentley and its parent, Rolls-Royce, were there to remind Brits – and anyone else choosing to care – that there would always be a Britain.

Some fifty years later, and now under VW ownership (roughly akin to Hitler buying Buckingham Palace, rather than bombing it), the Continental was relaunched – you guessed it – as a slippery 2-door built atop an upmarket VW-sourced platform. This, however, wasn’t Herbie the Love Bug; rather, this Continental GT was a faithful reinterpretation of what Bentley had originally wrought, with all the wondrous spec and performance the early ‘00s could deliver.

That first generation would be built for eight years, while the second – introduced in 2011 – would be in the lineup through 2018. It was then that the third generation was launched, and the 2021 model is sitting in my driveway.

To be specific, the Bentley parked in the driveway is a Continental GT V8 1st Edition in a metallic hue Bentley calls Kingfisher. And it is, to throw most of my objectivity aside, absolutely stunning. Kingfisher, if you didn’t know, is a medium metallic blue, adding a lustrous sparkle to the Bentley’s 2-door form. And while that form is larger than the pics might have suggested, this remains a very personal iteration of 4-passenger transport; it ain’t David Beckham athletic, but then, neither is it the Queen Mum.

Although its profile remains largely the same as the coupe I drove in Texas 15+ years ago, there are notable differences. This profile is more squat – less upright – than the 1st gen, while the greenhouse has been reduced, which is better if hoping to retain some degree of anonymity. And the Continental’s rear flanks are more aggressively sculpted; if it was female (and I was less politically correct) I’d think of them as child-bearing hips, but in 2021 I’ll simply offer ‘aggressively sculpted’. At its front, the Bentley’s face is more horizontal, but that doesn’t begin to diminish its menace; this is a face that will fill your rearview mirror in the nano-second it takes to pass you.

Inside, our test example offered its ‘main hide’ in Portland, accented by a ‘secondary hide’ in Imperial (there will always be a Britain!) Blue. The best, of course, is its veneer; it’s what Bentley calls Dark Fiddleback Eucalyptus over Grand Black. The overall impression is one of quiet, almost sublime luxury, underscored by a very real emphasis on performance and functionality.

Of course, a highly detailed exterior and lavish interior appointments are to be expected when getting well into six figure price points, but it’s what’s under the hood that will leave the more lasting impression. Bentley offers two choices in their Continental – a ‘cooking’ twin-turbo V8 delivering 542 horsepower and 568 lb-ft of torque, or a 6.0 liter W12 delivering, uh, more. Ours sported the V8, and was more than sufficient.

A choice of four driving modes allows you select your preference, which range from modest tickets to jail without bail. I most often selected the Sport mode, which adds to the car’s snap both crackle and pop. And yet even with more feedback from both under the hood and behind the tailpipe, this isn’t raucous; while at speed it might seem hairy, it’s not scary. And while the physics will do what they (invariably) will do, your psyche is comforted by Bentley’s Active All-Wheel Drive, which – on most surfaces – should keep you between the ditches.

All of this can be had for just that side of $200K, unless you do what the Bentley PR team did, which is to spec our test example with all manner of ‘1st Edition’ virtues. That, in combination with an upgraded audio system and Bentley’s Dynamic Ride option sent the base of just over $200K to a window sticker just under $300K. Obviously, no Bentley is for the financially faint of heart, but I can get my head around the price of a small single family home in Dallas; that higher figure is the cost of a condo in suburban DC.

At the end of the day, Bentley’s Continental GT is highly seductive, albeit a seductress you’d be comfortable taking home to mom. But don’t, forgawdsake, introduce her to your dad. Who wants a dad they refer to as Prince Hairy?