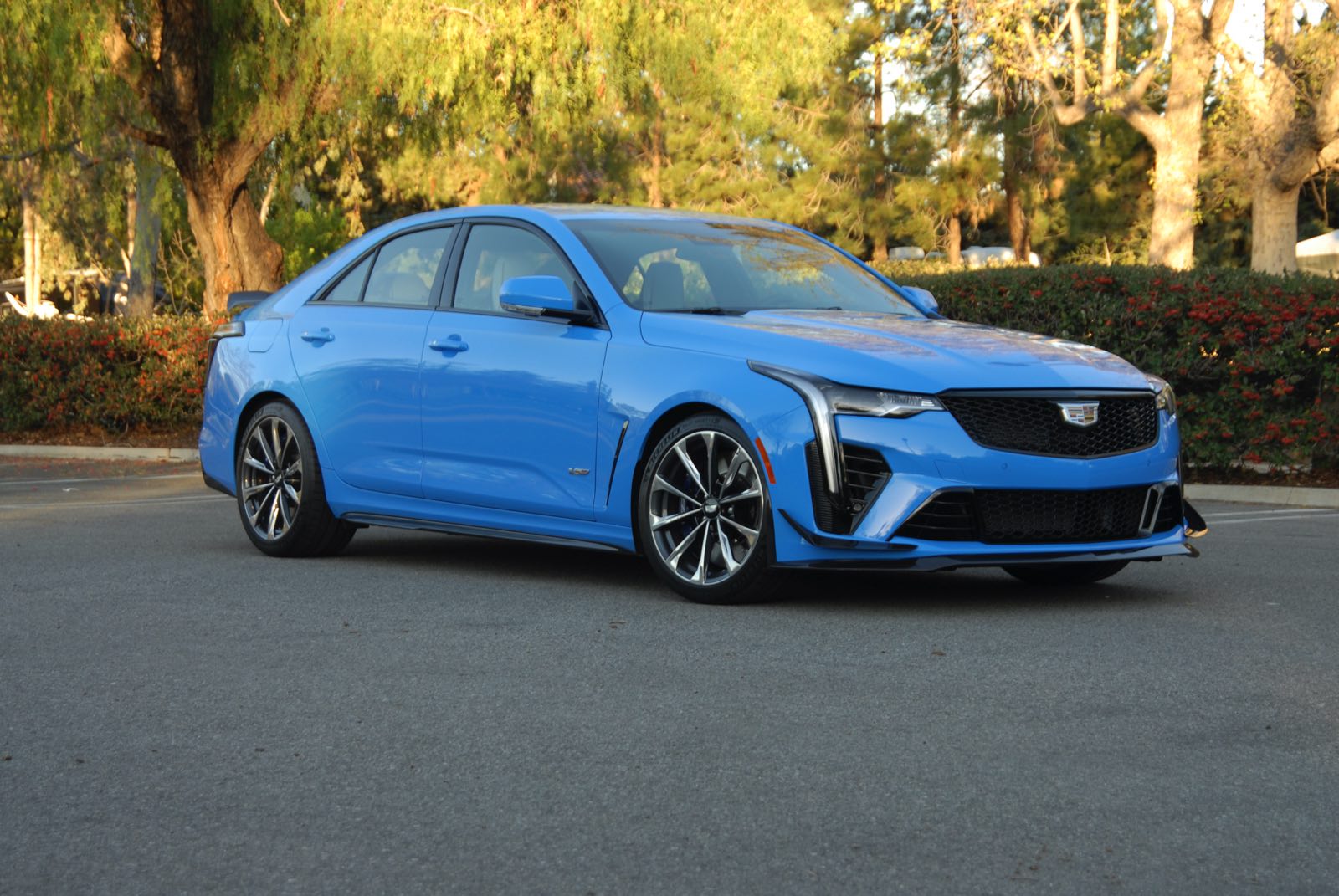 THE CADDY YOU DIDN’T SEE COMING

In a previous life I chauffeured Cadillac limousines, gliding down the Interstate with more presence—and length—than an Escalade ESV, and those limos would easily run 300,000 miles. Now I’m driving a compact Cadillac with specific owners manual preparations for driving-on-track. You thought electric cars were a big change?

The Cadillac CT4 V Blackwing picks up where the ATS V left off, an evolutionary update save the two-door version’s demise. In this short-circuit-arc Electric Blue, replete with dive planes and a trunk spoiler, you’ll not blend in anywhere – except, perhaps, a candy convention.

However, choose a less dazzling color and the CT4 wing becomes a fine commuter while maintaining its track-ready credentials. Combine a very stiff body structure with superb suspension, excellent steering, brakes that shame a BMW M3, a 472-hp twin-turbo V6 and your choice of a slick-shifting six-speed manual or ten-speed automatic and you’ve got one of the best-driving four-doors in this country anywhere near its price. Sure, the BMW M3 Competition and Alfa Giulia Quadrifoglio offer a more emotional engine note and a bit more speed, but neither offer a manual gearbox, and their base prices are $13,000-20,000 beyond the Blackwing.

I won’t argue with critics who find the Blackwing soundtrack its biggest (or only) drawback, but if you’re on the street you’ll spend less than five percent of your time making max power and noise, handily overcome by the sound system. On the track you’ll be too busy concentrating on braking points and steering inputs to notice.

Despite its solidity the car feels light on its tires and delivers a very compliant ride for gobbling miles. Ramp it up to sport, track or V settings and damping firms notably while it remains compliant with no banging or crashing on big bumps, and with the steering’s feedback and precision you can place the car wherever you want, whenever you want. You can’t compare it to a well-driven 911, but it kept the mirrors full for miles behind a less-well-driven one, and it changes direction like a politician at a press conference. The brakes are equally good, with crisp bite, excellent modulation and feel, and no fade noted on hairpin-riddled mountain descents. If you never drive this through the Hill Country or around a road course you will miss the point–and GM’s best dynamics engineers’ work– entirely.

As with drive and traction management modes there are multiple choices in launch control, yet its ability to put power down almost negates the need. GM claims 60 mph in 4.1 seconds with the manual; the optional automatic ($3125) is a hair quicker and up one EPA rated mile-per-gallon Top speed is quoted at an Autobahn-appropriate 189 mph, though Cadillac can’t say how much it drops with the carbon-fiber packages that push the car into the road at speed.

At this point in the conversation, with me running short of superlatives, others inevitably bring up the supercharged V-8 CT5 V Blackwing. Agreed, it sounds better and is faster; it’s also thirstier, nearly 300 pounds heavier, $24,000 more and has a propensity to spin and smoke its rear tires whenever unleashed.  The big ‘Wing is a fine car in is own right, but on a 4.2-mile, three-minute track lap, the extra 196 horses make it only 1.9 seconds quicker. Cadillac, of all people, is showing the value of Lotus founder Colin Chapman’s thinking: add lightness.

Beyond the fine-tuning the biggest improvement from ATS to CT4 is the interior, suitable for the $60K tab and driving mission. Materials and styling are contemporary and logical, the CUE (Cadillac User Experience) touchscreen is miles better than the old haptic/slider setup, and my gripes were limited to minimal rear seat storage, power ports under the armrest (which means wires running up the console for anything not using the charging tray), and the gloss-finish center console annoying in sunny climates.

I’d opt out of the red stitching and piping, but can’t argue with the comfort and support of the seats, well-placed pedals, and a decent view out—the spoiler barely appears in the mirror. The digital instrument display offers myriad configurations, though I couldn’t find an analog representation for often-changing parameters (oil pressure, boost, etc.), just digits.

Cadillac’s CT4 V Blackwing begins at $60,000. This example was built with track fun in mind, sporting many options and an MSRP of $76,000—importantly, none of these options affect its performance at legal speeds and only the carbon-fiber add-ons and retrospective driver-education from the on-board data/video recorder would help on track. You could probably tweak an automatic with moonroof and driver assists past $80,000, but why not follow Chapman instead?

In the end it doesn’t matter if this is the best-handling or fastest small four-door sedan, because it’s immensely rewarding to drive regardless of lap length, commute, or days on your road trip.