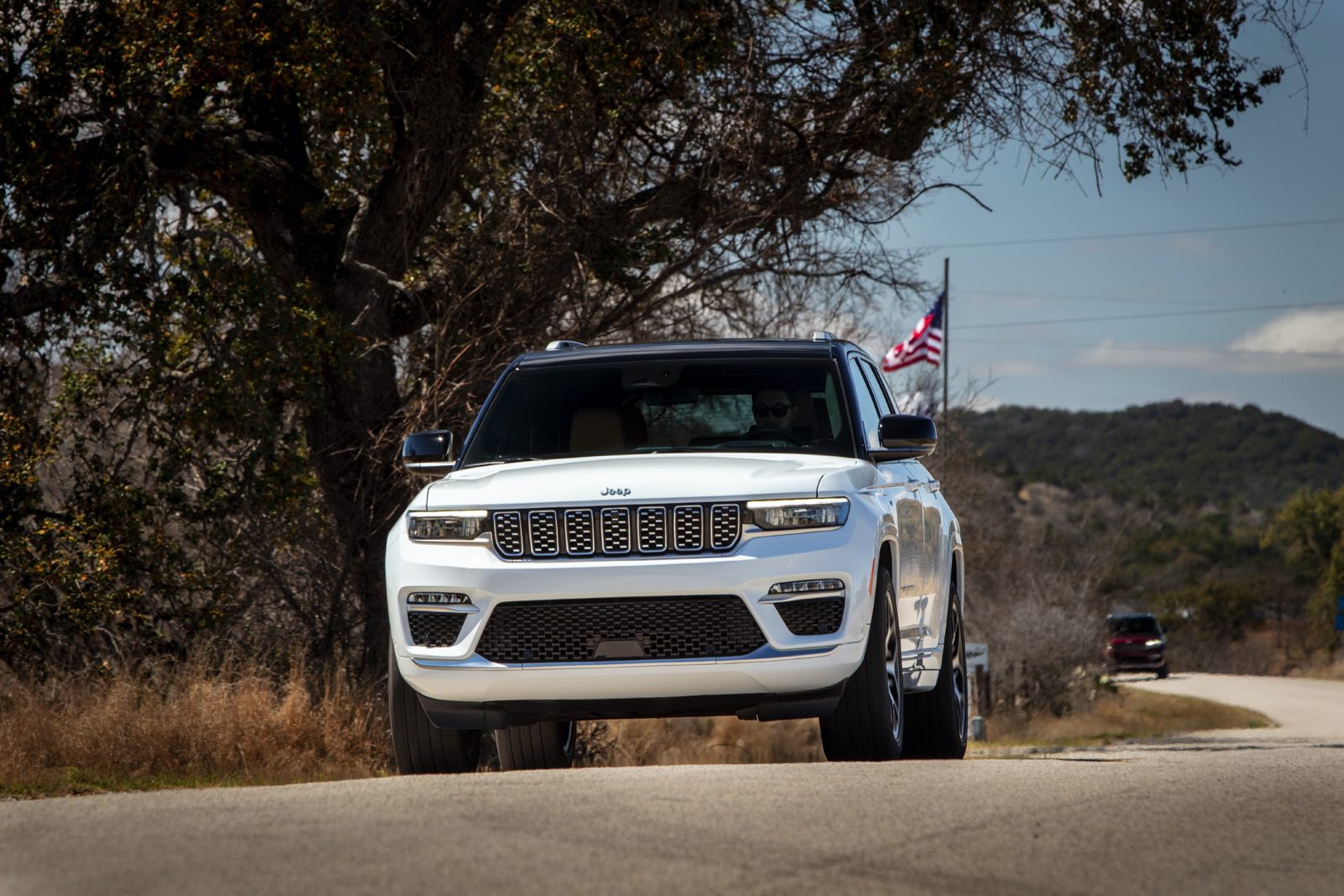 It’s been some thirty years since the Chrysler Corporation, not long after its acquisition of AMC and Jeep, introduced its Jeep Grand Cherokee to – at the time and in hindsight – a bunch of fanfare. Combining Jeep’s off-road capability with genuine on-road refinement and enclosed by what seemed – even then – a timeless design, the concept took off like free apps. (And that’s before, of course, there were apps.) Now in its fifth generation, Chrysler has morphed into Stellantis, and Jeep’s Grand Cherokee is now offered as a plug-in hybrid, the 4xe. As you’d guess, the combo of off-road capability and all-electric mobility is worth a drive, deserving of a review and – perhaps – deserving to be on your shortlist.

In its all-new Grand Cherokee Jeep has built on the same basic menu the brand has employed in its 30-year run. But like most new iterations of existing brands, from Porsche’s 911 to Ford’s Mustang to Chevy’s Tahoe, the Grand Cherokee is more grand, growing bigger, more luxurious (especially in our test Jeep’s Overland trim) and – in this observer’s view – a tad softer, more benign. That growth is confirmed with the tale of the tape, as its wheelbase and overall length are a full 7 inches longer than my wife Tina’s ’06, while the width has grown 4 inches when compared to our 3rd-gen GC. Finally, the plug-in hybrid 4xe boasts (or bloats!) a curb weight of 5,400 pounds, while our Hemi-equipped ’06 Limited sits at an even two tons.

The good news: Grand Cherokee DNA is unmistakable, from the grille to its wheel arches and greenhouse – which, happily, remains a real greenhouse with genuine visibility. Notably, the design team created both a 2-row and new 3-row architectures (tested here) and didn’t screw either variation up! And while not sure I’d order my Grand Cherokee in white, Jeep’s Bright White clearcoat makes a genuine statement on its new sheetmetal.

Inside, above and beyond the off-road oriented Overland’s base price of almost $66K is its Luxury Tech Group IV (the IV is – I’ll guess – used to reduce the anxiety brought about by a monthly payment of around $1500), which provides Nappa leather seating, auto-dimming mirror, wireless charging and back massaging on both driver and front passenger seats. Obviously, $2K is chump change relative to the base price, but I have to wonder why a base of $65K doesn’t already include Nappa leather, a charging pad and back massage?

Fronting the driver is the electronic display that’s expected, if not embraced. And while audio and heating/ventilation controls are reasonably intuitive, they still require more attention than the conventional, analog-type controls which dominated Jeep dashboards since the brand’s ‘General Purpose’ inception.

That extra wheelbase (when compared to ’06 – or the ’16) supplies more legroom in the rear, while the Grand Cherokee’s additional width gives the third passenger in the rear seat better-than-even odds of staying comfortable. And when that second seat is folded, cargo volume expands from just under 38 cubic feet to 71, and it’s all flat, making the trip with boxes or artwork (hell, you could sleep back there!) similarly easy.

Under the hood, Jeep’s brand team gives you a choice of a 3.6 liter V6, a 5.7 liter V8 (in upmarket trims) or a 2.0 liter turbocharged four in combination with an electric motor and battery pack. The 4xe Grand Cherokee tested offers a combined EPA estimate of 23 miles per gallon, up to 25 miles of all-electric range and a combined gas/electric ‘equivalent’ of 56 miles per gallon. And all of that offered by the 4xe sounded rosy until, you know, I drove it.

It groans. Obviously, with a curb weight of 5,400 pounds you have a lot of mass to overcome, and 470 lb-ft of torque should overcome it. But on light throttle applications the drivetrain seems to be working harder than it should, especially when you consider the Grand Cherokee employs a conventional automatic – an 8-speed TorqueFlite – and not a now-typical CVT. I find the slight disconnect between throttle and response acceptable in my wife’s Toyota Venza hybrid, which was $40K; it’s less acceptable when spending almost $70K.

Of course, if you have a charger at home or work you can make one way of a 25-mile commute all-electric – and if you have charging at both home and work your entire week can be driven without burning any gas. For those of you with that sort of eco-commitment, this box is worth checking. But if you don’t have that charging infrastructure available to you, or intend to use the Grand Cherokee on weekend trips longer than 25 miles, the 19/26/22 EPA estimate of the 3.6 liter V6 is compelling, and is available in a Limited trim for some $10K south of where the 4xe sits. At $4/gallon that $10K will buy 2500 gallons of fuel, and over 50,000 miles of driving. If you do the math, that math will be accompanied by a lot of head scratching.

In sum, Jeep has done what most brands have done in our post-pandemic environment…it’s chasing the buck. Spec your Grand Cherokee carefully and you’ll end up with a decent buy on an SUV providing plenty of capability and – using our 2006 Grand Cherokee Limited as a test case – longevity. I’m not a prospect for a $70K 4xe, but could be a handraiser for a $50K Limited. Where do I sign?