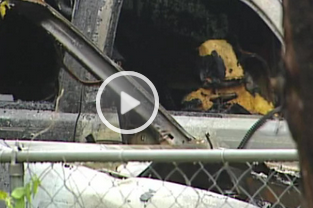 AUSTIN — Investigators said a recalled part is to blame for a Tuesday morning fire that killed two young brothers. And KVUE News has learned more than a million other trucks with this wiring problem are still on the roads.

Frantic neighbors called for help, but there was little anyone could have done as fire ripped through a home on Wagon Bend in Southeast Austin this morning.

Claudia Hernandez, a neighbor, rushed over after she heard her dogs bark and saw the flames from her front window.

“We tried to do something to help them, but there was nothing we could do, there was a lot of fire,” Hernandez said.

A family of seven lived in the home, five escaped. However, firefighters were unable to save two young brothers, ages 7 and 5.

“She was always worrying about the kids,” said Hernandez.

Investigators blame a malfunctioning cruise control switch in the family’s Ford F-150. That switch was part of a recall back in 2005.

According to federal records, Ford estimates nearly 4.3 million cars and trucks had these defective switches. Yet only 2.5 million have been repaired.

Ford did send reminder letters to car owners as recently at 2010, warning them that a “fire can occur at any point even if the key is not in the ignition.

KVUE News does not know whether the family ever had their truck fixed.

The other issue investigators discovered was that there were no working smoke detectors in the house. That’s hitting home with Shaw.

“I remembered that we had taken our smoke detectors down to replace the batteries. So I’m going to go home and replace them and get them back up. It’s very, very, very important,” she said.
As the memorial outside the home grows so does the heartbreak for two little boys lost too soon.

“It is sad, they are going to need a lot of help,” Hernandez said.
You should make sure your car manufacturer has your current address or you can check here to see if any recalls have been issued for your car.