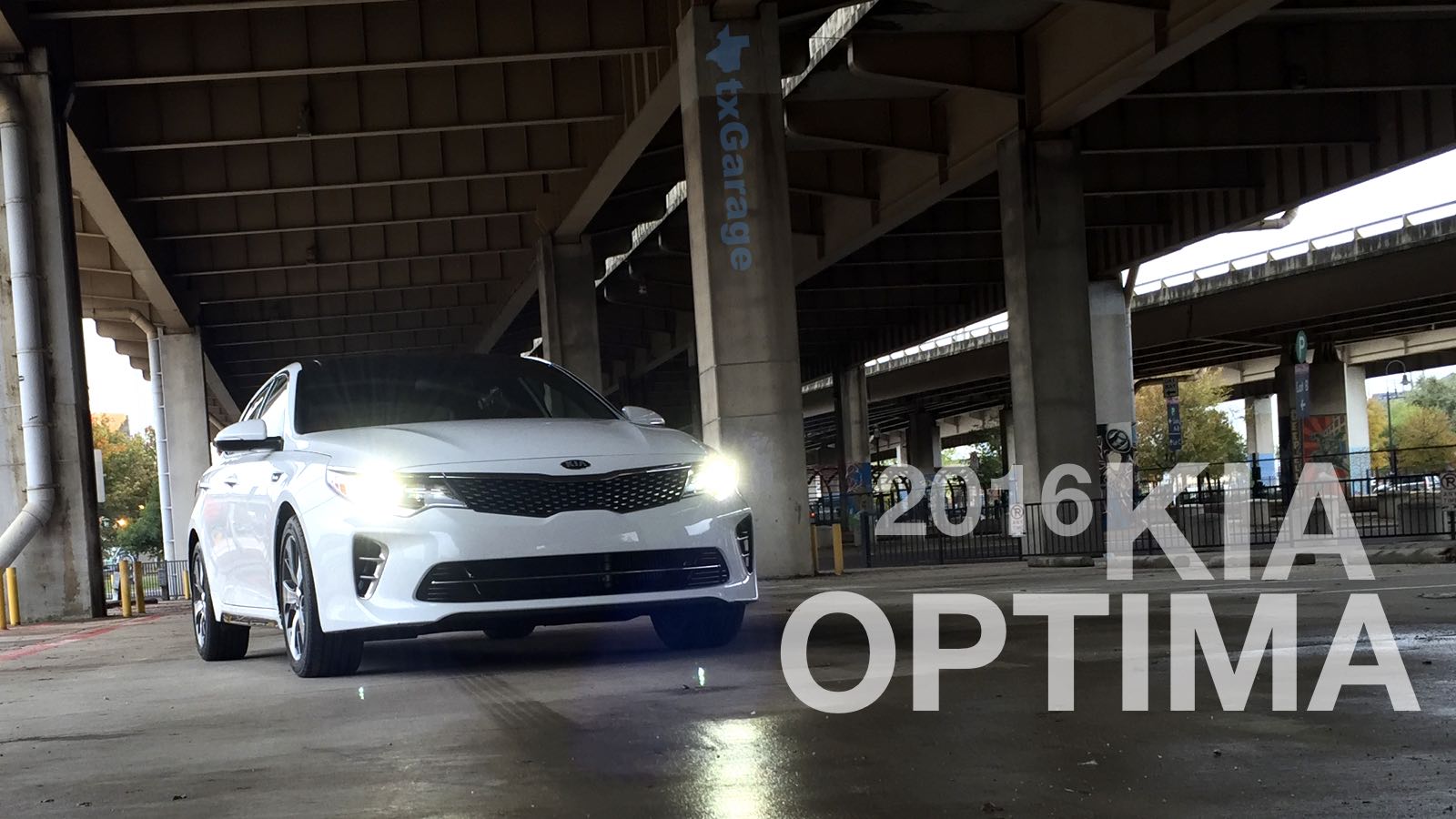 Southlake, TX – This week, while listening to NPR’s morning news, I heard a story on the decline of sedan sales. Given that the topic dims when compared to coverage of The Donald or Secretary Clinton, I’m always mildly surprised – to put it mildly – when National Public Radio covers anything automotive except the more-than-occasional recall. In that I was sitting in one of those sedans – a decked-out Kia Optima SX Turbo – I enjoyed a vested interest in both the story and its ongoing evolution. Sedans are (obviously) in decline, which makes the good ones even more newsworthy. Here, then, is the news…

EXTERIOR: Described as ‘all-new’ by Orth Hedrick, Kia’s VP of product planning, the Optima’s 2016 platform team kept the 4-door’s previous design cues largely intact while rearranging most of what’s beneath that sheetmetal. One look at the Optima – or any recent Kia – and it’s immediately clear there is a design-oriented exec at the helm. And in Kia’s case the exec is not only design-oriented, he’s Peter Schreyer, an honest-to-god designer hisownself. At a time when automotive design more often suggests caricature than character, the Optima fully reflects the latter while effectively shunning the former.

The wheelbase is stretched ever-so-slightly, while the Optima is widened by 1.2 inches. The end result is barely visible to the naked eye, but serves to expand both the interior room and luggage capacity. There remains a decidedly front-wheel drive proportion, which makes sense given the Optima’s front-wheel drive. But if the Jag design team had considered a sequel to the X-Type (they didn’t) and elected to eschew its nostalgic design cues – as they have with their current lineup – the end result might look something like this. It’s a dynamic, upscale look that belies the Optima’s midsize price point.

INTERIOR: If the Kia’s exterior is clearly – and cleanly – contemporary, the Optima interior takes a more traditional route in combining a clean design with a balanced approach to functionality. The leather-covered buckets provide a comfortable combo of easy access, supportive cushion and adequate lateral support. The controls represent a nice blend of easy functionality (buttons for both audio and HVAC controls – crazy, that?) and all of the (available) technology real techies deserve. We liked the touch points, the intuitive layout and – of course – that just-right balance of adequate room and personal feel. Despite the Optima’s almost-a-fastback profile no one will confuse this with a 4-door coupe (it’s too spacious), but neither will you think you’re in Kia’s Sedona minivan when behind the wheel or doing your best impression of Autobahn driving.

UNDER THE HOOD: Kia provides three engine choices, beginning with a relatively pedestrian 2.4 liter DOHC four producing 185 horsepower and 178 lb-ft of torque. This is the cooking engine, and will provide any number of consumers with more-than-adequate performance combined with very real (25/37/30 EPA estimates) efficiency. It’s just, well, non-descript, while the other two powertrains take a more expressive route to performance and efficiency.

Kia’s SX 2.0T, which we drove, supplies 245 horsepower and 260 lb-ft of torque from its 2.0 liters. We liked the torque, and the ease with which that V6-like power is transmitted to the front wheels through its 6-speed automatic. Fully equipped, with a SXT Premium Technology package, this Optima variant weighs in at something north of 3,500 pounds, roughly 300 pounds heavier than its more modestly-equipped siblings. And while you wouldn’t consider a 25 mile-per-gallon combined estimate ‘thirsty’, neither would you consider it particularly efficient. You pay your money and you take your choice, but this – with an MSRP of $35K – isn’t the one we’d buy.

Our money would be on/in the 1.6T, which combines a 1.6 liter turbocharged four (178 hp/195 lb-ft of torque) with a 7-speed dual clutch transmission, and weighs in at a relatively svelte 3,200 pounds. We haven’t driven the Optima with this powertrain, but loved it in a Hyundai Tucson – and the Optima undercuts the Tucson in both lower weight and (obviously) lower center of gravity. And at just $25K for a well-equipped LX, with a 28/39/32 EPA estimate, this represents both an efficient, affordable commuter and a recreational get-out-of-town ticket.

We’d ask L.A.- based Road Race Motorsports to add a few horsepower (thirty?) and a handful of suspension tweaks, and then drive it like we stole it. And with an out-the-door investment of under $30K, we would have stolen it!

If Kia’s Sorento and redesigned Sportage were truly carrying their weight in the SUV sweepstakes Kia might not care about their cars. But Kia’s SUVs remain relatively niche players in those sweepstakes…and Kia does care about their cars. For those that continue to like driving, the Optima can (and should) be optimized. If you try it, I think you’ll like it. And I believe you should buy it.