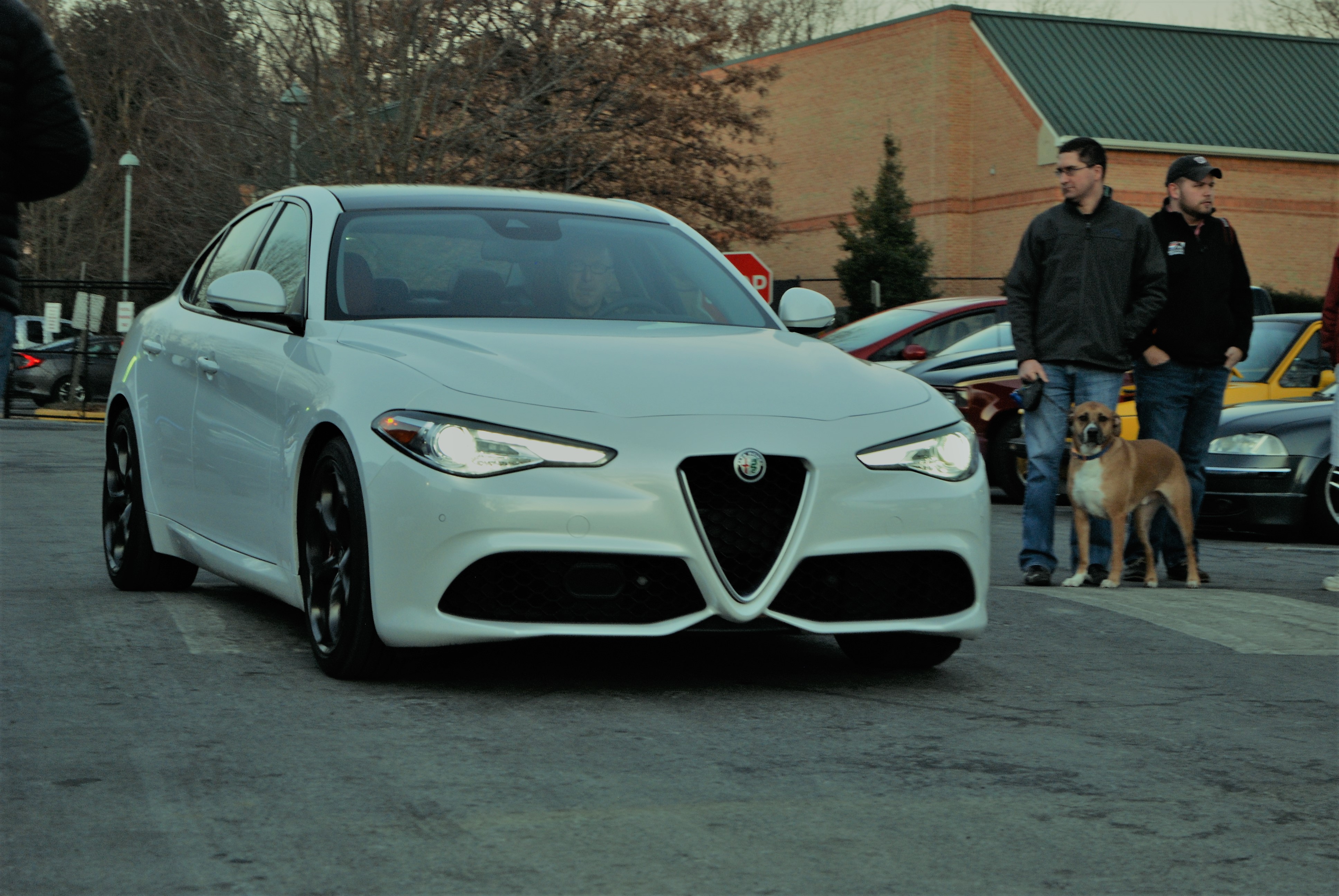 In Neil Diamond’s Sweet Caroline, Neil may not remember where it began, but in writing a review of Alfa Romeo’s new Giulia Ti, I certainly do. Always a fan of Alfa’s Duetto Spider and GTV coupe, I sealed the deal with a purchase of a new 1974 Alfa Berlina (sedan), some two years after the car hit the lot at Precision Motors in Dallas. 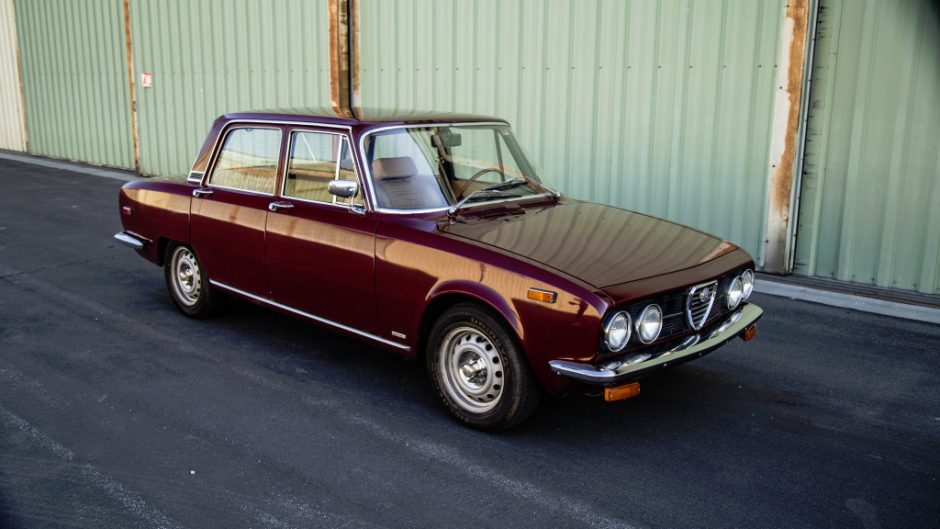 And yeah, that’s two years after hitting the lot. Finished in a mustard yellow (think spicy mustard – but not quite Grey Poupon), there was little mystery as to why it had sat for some 24 months: it was a sedan, when Precision’s Alfa customers were buying Spiders and coupes. And it was an Alfa, when Precision’s sedan customers were buying Volvos. So, it was left to the 23-year old with an oh-so-patient wife, one kid and a garage ready to fall on the car with the next gust of wind. And in its upright, muddled mustard way, the Alfa was beautiful.

Later, I had a short run as the manager of a Lotus/Alfa Romeo showroom in Plano – something I typically don’t mention unless asked. There, in the late ‘80s, we offered an updated version of that same Duetto, along with an all-new 4-door, which Alfa dubbed ‘Milano’. The Spider’s US-mandated safety bumpers were awkward; in Alfa’s Milano, the entire architecture was awkward. But both were huge fun to drive, and perfect if needing an antidote (or anecdote) to German machinery of the time.

Fast-forward thirty years and Alfa has returned to our shores, initially selling its 4C coupe and spider and, more recently, exporting to the U.S. its Giulia sedan and Stelvio crossover. At this point in time we’ve driven all of the offerings. The 2-place 4C, with a mid-mounted 1.7 liter turbocharged four, serves as a fairly credible update on Ferrari’s Dino formula, without the baggage (like an elevated window sticker) that comes with a Ferrari formula.

At the opposite end of the sporting spectrum is, of course, the Stelvio, which – in company with Porsche’s Macan – is one of the more attractive ways to grab a gallon of milk. We wish it were dimensionally a tad smaller, but behind the wheel it feels smaller – and tops out at around $50K, which is where the small Porsche crossover begins. We’re not buying one, but would certainly be open to talk of a long-term loan.

And then, of course, is the Giulia. Last year we drove the high-performance Quadrifoglio, blessed with a 3.0 liter turbocharged V6 delivering 505 horsepower; its powertrain sets your brain on fire with each less-than-judicious application of the throttle. This is what motoring should be, and were it not for a $75,000 window sticker, would be. If Herbert Hoover had access to a Giulia Quadrifoglio he’d have screwed his ‘chicken in every pot’ pledge and gone right to ‘an Alfa in every garage’. But we digress… 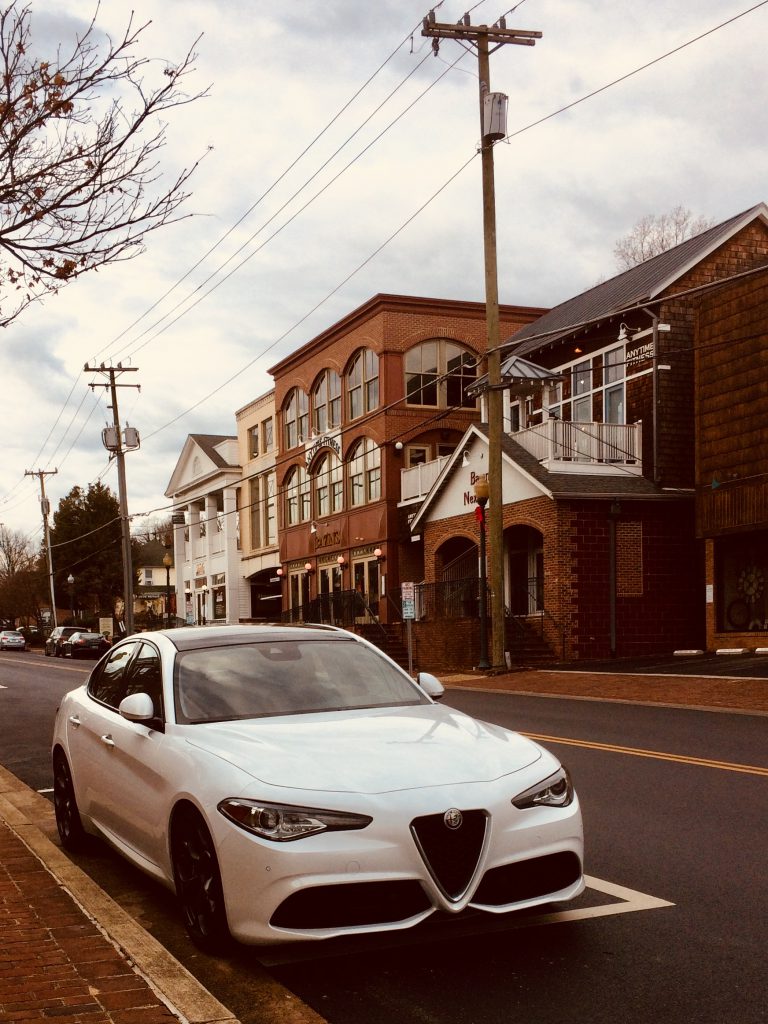 More recently we’ve explored the more basic Giulia Ti, but don’t confuse ‘basic’ with, well, basic. With its 2.0 liter turbocharged four delivering 280 hp and 306 lb-ft of torque, this is all the scoot anyone would rationally need, with 60 arriving in under six seconds, along with a cruising speed absolutely perfect for repeat offenders. Remembering the visual under the hood provided by our ’74 Berlina, we wish today’s Alfa team could provide something other than a plastic engine cover. We’d also hope for two overhead cams rather than one, and a redline north of the 5,500 rpm presented by the Giulia’s tach. But we digress…

The Giulia’s platform, supplemented by the Ti’s (available) active suspension and limited slip, is almost scalpel-like in its precision, while exhibiting little of the harshness normally associated with sport-type suspensions. And has been noted by virtually every reviewer, the Giulia steering is totally linear, with what we think is the perfect amount of assist.

Inside, you’ll find a driver/passenger environment personal and accommodating, but no one will confuse it with expansive. If you need the interior room, go directly to the 5 Series or A6…or call Enterprise. But if you typically travel with but two, and only occasionally grab another couple, this is the 4-door perfect for getting somewhere – or going nowhere. The Ti’s sport buckets are a tad more aggressive than the all-season standard, but not restrictively so. And once in you’re supported here, there and everywhere; Alfa even provides a manually adjustable thigh support.

At an as-tested price of $53K, we regard the Giulia Ti as a good – although not great – buy. A more judicious reading of the options, however, would have us deleting the sunroof, along with at least one driver assist package. That puts the window under $50K, at which point I’d remove myself from BMW’s M2 waiting list. As if…