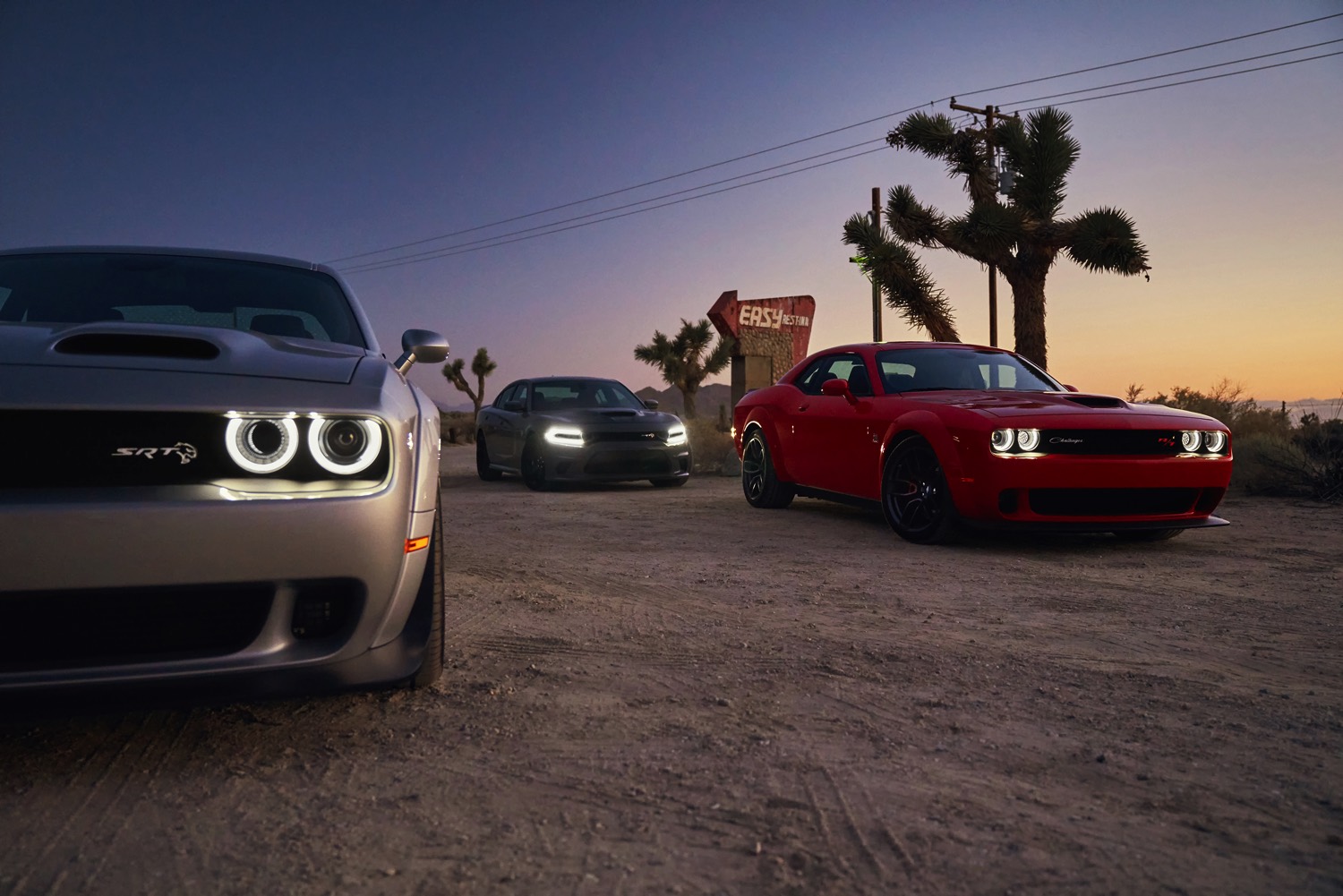 Dodge unveiled the latest 2019 version of their twin bad boys, the Charger and Challenger; each is getting some go-fast goodies from their outlaw brother, the Demon. The 2019 Challenger SRT Hellcat will be receiving a 10hp bump – to 717hp – and a (functional) dual-snorkel hood scoop that looks like a homage tribute to the 1970 Dodge Coronet R/T. The wide-body design will allow owners to fit wider rubber in the back for track use, or – you know – to look cool.

The big announcement, however, is what the mad engineers at SRT did to keep the Demon spirit alive after its production ended in May. They built the Hellcat Redeye, which as their word team puts it, is “a Hellcat that’s been possessed by a Demon.” The Redeye cranks out a whopping 797hp! (I imagine they dialed it down a tad as to not anger Demon owners.)

The Dodge dudes claim it to be the fastest production muscle car around, with a 0-60 time of 3.4 seconds, a quarter mile in 10.80 seconds, and boasting a top speed of 203 mph. In true Mopar tradition (in giving their muscle cars a little bit of comedic attitude), you’ll be able to spot a Redeye because the Hellcat badge will have glowing red eyes. As well as a different spoiler from other Hellcats and Scat Pack Challengers.

An 8-speed automatic will be tasked with sending all this new power to the rear wheels. The Redeye will not be a purpose-built drag car that happens to be street legal, like the Demon. It will not have the Demon’s suspension setup, nor will it have a trans-brake. But, it will have line-lock to turn the rear wheels into fog machines or create smoke signals. And here’s the best part. The Redeye is not a special edition with a limited production run. Dodge estimates the Redeye will make up 7-8% of Hellcat sales. Pricing for the 2019 SRT Hellcat starts at $58,650 and the Redeye starts at $69,650 (a $1,700 Gas Guzzler Tax will be added for both models).

DANCING WITH THE DEVIL

I’ve driven the SRT Hellcat on three different tracks in the last three years. Going flat-out in a Hellcat (in a straight line) is a memory that stays with you, using 707hp to hockey punch the air and reach triple digit speeds. But with great power comes great responsibility.

I’ve always said that the SRT Hellcat is the .44 Magnum of power cars. It’s cool. It’s intimidating. But once you feel how hard it can kick it takes a certain kind of person to want to keep using it, let alone be accurate with it. Now it seems they’ve created a higher caliber bullet with the Redeye.

My worry: I do not think the average driver – or, for that matter, the average enthusiast – can handle having nearly 800hp on tap. It’s like a self-serve bar that only carries Jägermeister and Redbull. I’ve lost count of how many stories I’ve seen on the internet of people totaling their Hellcat days, hours, even minutes after leaving the dealership.

One should not blame the car, because in the end it was just following the driver’s command (or inattention). The Hellcat is not a traditional muscle car. It can handle turns, stops on a dime, and do more than just melt rear tires. It’s a real performance vehicle equipped with an adrenaline IV. It’s Burt Reynold’s mustache on wheels, with an engine note as piercing as Steve McQueen’s eyes. I’m personally annoyed that people treat them as a gimmick. And this – doing a burnout in a Hellcat is not impressive. It’s like using morphine to treat the sting of a paper cut.

I cannot wait to drive the Redeye next year with a heavy foot and cautious mind. And you know what they say: Dance with the devil? You might get stepped on.