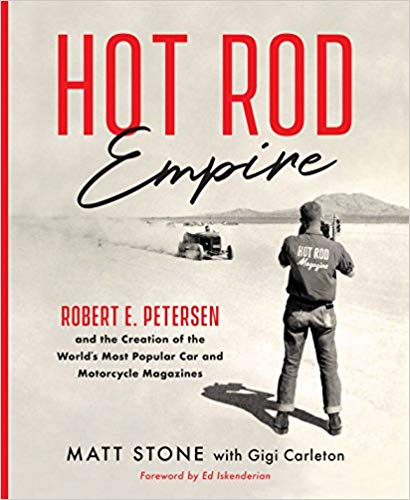 My grandson Rhys, now six, was discussing Father’s Day last week. I casually asked him if he had given a gift for his dad any thought; after a moment, Rhys offered that he thought he’d draw something rather than make something. It’s nice when the decision process is that simple.

If, however, your choices have evolved…and knowing that a dad’s needs (we don’t like shopping) are many and varied and evolved, I’m once again  making a pitch for a motor-centric book for Father’s Day. Luckily, on the shelf we have three well worth your consideration.

One of the first automotive mags I would have picked up, back – I think – around 1963(!) was Motor Trend. I’m guessing it was the mag’s annual guide to the new model year, when the ‘model year’ descriptive still meant something. At that point I didn’t have a good feel for things like narrative and/or editorial viewpoint, but a reader had to admit MT was comprehensive; I couldn’t put the mag down, afraid I might miss something.

The story of Motor Trend and its founder, Robert E. Petersen, is capably told by authors Matt Stone and Gigi Carleton in their Hot Rod Empire: Robert E. Peterson and the Creation of the World’s Most Popular Car and Motorcycle Magazines. (If you can get your head around the book’s title, you’ll easily absorb the number of magazines in the Petersen publishing catalog.) With a postwar time frame and Southern California supplying the geographical backdrop, this is exactly what you’d expect when combining cars, Sunset Boulevard and California’s dry lake beds. And despite the today’s relative dearth of automotive titles – at least titles in wide circulation – both Motor Trend and Hot Rod have retained their ubiquity. Hot Rod Empire is available from Burbank’s Autobooks-Aerobooks, and is published by Quarto.

Petersen’s pubs might have provided your first look at Ford’s Mustang in ’64, and over the years supplied the updates to only Dearborn knows how many variants of Ford’s iconic ponycar. The first Mustang to adapt the Big Bang Theory was the Boss 429, whose origins, launch and societal impact are chronicled by writer Donald Farr in his Boss Mustang: Fifty Years. The book’s launch coincides nicely with the 429 Boss’ 50th anniversary, making it a timely buy for anyone wanting to remember 1969. That’s if, of course, a marijuana haze hadn’t gotten in the way.

Mr. Farr, as editor of Mustang Monthly magazine, certainly knows his subject matter. And while the info may be too granular for the casual fan, I have no argument with Farr’s attention to detail when the subject matter is so deserving. Farr takes the reader from the boardroom, where the initial decision to produce the Boss was made, to the racetrack, where the Boss’ iconic status was cemented. And while we’d take exception to the publisher’s claim that among ‘all the legendary names in the history of the Ford Mustang, one stands apart: ‘Boss’ (we’d opt for Shelby), there’s no argument with its oh-so-visceral appeal. For less than a tank of premium, you can enjoy your own copy, which is – again – courtesy of Quarto Publishing.

If, instead of buying Dad a motor book, you’re thinking you might actually buy him a ‘motor’, consider using author Max Zanan has a point of reference. Max’s small paperback volume, Car Business 101: #CrazySh*tCarDealersDo, is a valid intro (or if you’ve been there, a reminder) of the rut – some 120 years after the first automobile sale – much of automotive retailing remains stuck in.

As a graduate of Car Sales 101, with some twelve years of showroom experience in sales and sales management, I’m generally a defender of automotive retail when confronted by someone depicting the industry with nothing but clichés. Regrettably, just when you thought rationality had finally become the retail standard, you’re hit across the head with something straight out of 1964.

Generally, this is a quick, solid read. With a bias toward newsprint, I’d take issue with Zanan’s take on newspaper advertising (for car dealers, he sees no value in it), but that’s a relatively small nit to pick within the book’s pages. Also, there’s no Table of Contents! What kind of crazy sh*t is that?

The Complete Book of Pontiac GTO – Getting Your Goat
BOOK IT! Your end-of-summer reading list
Event Calendar