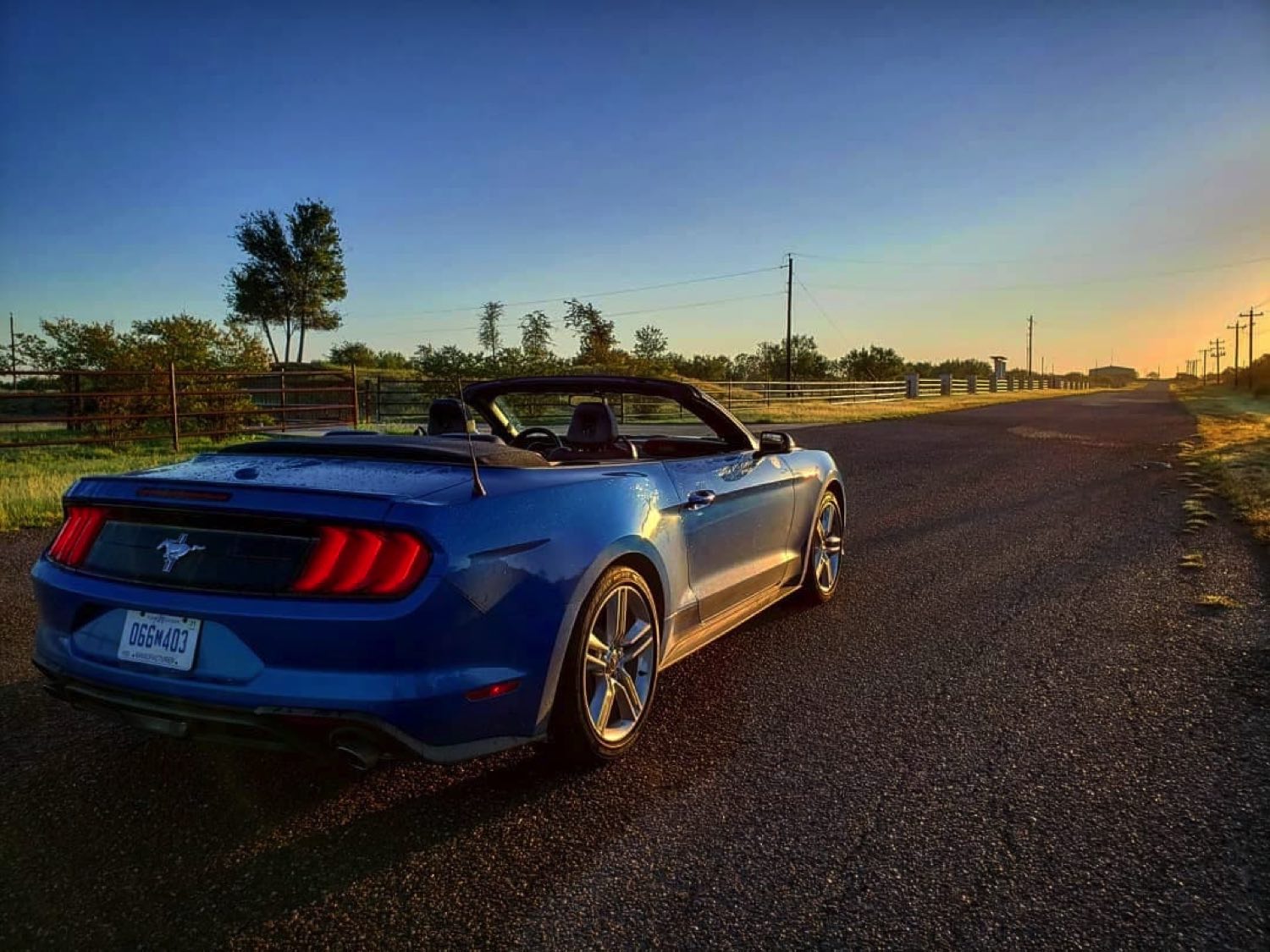 There are enough articles about EcoBoost Mustangs that begin with some declaration about eight being the magic number of cylinders a Ford Mustang should have. And I’m no different. I like the V8 Mustang. The words mesh beautifully, like ‘2-day shipping’, or ‘357’ in front of the word Magnum. However, Ford has been shoehorning the 2.3-liter turbocharged four-cylinder EcoBoost engine into their pony car for half-a-decade now. Recently, Ford gave me the opportunity to spend a week with a 2020 Ford Mustang EcoBoost with the top down and six gears to manually shift. The main thing I took away from this experience? The EcoBoost engine is the low-cal V8 option.

EXTERIOR: What we are looking at is possibly the last of the current 6th-generation Ford Mustang, as an all-new Mustang is said to be hitting showrooms as soon as 2022. (Like a new haircut, one gets used to it just before it’s time to go back to the barbershop or salon.) This 2020 Ford Mustang in Velocity Blue lassoed the eye into paying attention as it drove by, while the subtle metallic gray hood stripes give the car a proper American sports car look. And the narrow, angled headlamps supply the Mustang – and its owner – a cocky (but not overly confident) front fascia.

It’s a handsome car that proved to be photogenic. A Ford Mustang is by no means a rare sight on the road, but even with that the 2020 Mustang stands out in a crowd.

INTERIOR: Our Ford Mustang was equipped with the premium package, which offers heated and ventilated leather bucket seats.  The convertible top folds up and down in seconds after moving a handle in the center of the windscreen’s frame. Panoramic sunroofs retract slower than it takes the 2020 Ford Mustang to undress its soft-top. While cruising around downtown San Antonio, my cowboy hat stayed on my head without feeling the wind wanting to blow it away. With the roof on, the Mustang is surprisingly quiet, reducing the outside roar to a whisper.

Premium midnight blue seats are comfortable and supportive, but the ventilation motor is noisy. When the seats are cooling, it sounds like the AC is on full blast directly behind you, while not powerful enough for Texas in August. The trunk is larger than you’d expect; that is, it’s more spacious once you get past the narrow opening, with plenty of room to fit several luggage cases or squeeze in a foldable baby stroller.

PERFORMANCE: The standard 2.3-liter turbocharged EcoBoost engine produces 310 horsepower and 350 lb-ft of torque. If you opt for the 2.3-liter high-performance spec, that power output gets bumped to 330 horsepower. Either pick delivers more than enough grunt to make the turbocharged four-banger Mustang a genuine sports car.

Inside the cockpit, the engine has a satisfying rumble as you accelerate off the line. But before you get excited, you should know that like a $50 diamond ring, the audio is fake. The engine noise you hear on the inside is not what people will listen to on the outside as you zoom past at 4,000 rpm.

The EcoBoost Mustang uses synthetic sound to pump engine ‘rumble’ into the cabin. Some have argued that this is cheating – they’d rather listen to the engine in its true voice. However, the other side of the argument is “what’s the harm?” The fake engine noise is mainly for the driver’s benefit; while artificial, the noise is what you want to hear in a car of this type.

As noted, the EcoBoost Mustang convertible I tested was equipped with a six-speed manual transmission. The short-throw shifter is ergonomic, right where you need it when your right hand leaves the steering wheel to shift. While driving, I found shifting from third down to fourth to be my favorite as it takes but a pinky finger’s level of effort while rewarding the driver with a steady pull of power.

During my “empty road in Mexico” test, I discovered that the 2020 Ford Mustang EcoBoost convertible doesn’t want to go faster than an indicated 122 mph. That’s much lower than the hardtop model, and it means that most 2.0-liter turbocharged sedans on the market will outrun this pony car on a long straightaway.

I also had expected the mpg to be better. During a week of testing that included two 150-mile drives, I averaged 22 mpg combined and 25 mpg on the highway. Better than a V8, but not by much. The convertible EcoBoost Mustang’s starting price is $32,000, with the premium model starting at $37K. The 2020 Mustang EcoBoost convertible shown in this review was priced at $40,280.

FINALLY: If you want a 2-door sports car that’s larger than a Mazda MX-5, more powerful than a Subaru BRZ, an available trans and with room in the back for miscellaneous cargo, the Mustang EcoBoost checks all the boxes. This four-cylinder turbocharged pony car offers competitive handling, classic styling and rear-wheel drive fun. It’s a sports car you can drive to work and be the hero car of a weekend adventure. Yes, the engine note you hear may be fake, but it doesn’t hurt the car’s appeal.

The 2020 Ford Mustang EcoBoost convertible delivers a satisfying blend of comfort and agility. It is a suitable sports car for crossing state lines on an open-ended road trip or hitting the apex on a twisty back road. EcoBoost Mustangs can run in their own herd. The days of looking down on four-cylinder Mustangs are all but gone – thanks to the EcoBoost engine proving it can do as much with less. It’s a performance car with fewer calories, a V8-lite. As they say: tastes great, less filling…or is it less filling, tastes great?