As you may know Lotus is one of our favorite car manufactures, at txGarage, from the Elise and Exige to the Seven and the Carlton. Lotus has been making uncompromising sports cars since its Mk1 in 1948.

The new Evora, launched in July 2008, was to be a 2+2 sports car with a mid mounted 3.5L V6 engine. To some this would not be a true lotus with the added weight and comfort given special attention in this car. The first of these cars had only been delivered to customers a week ago and Lotus is already showing off the newest, inevitable, variant of the Evora. That would be the Type 124 Endurance Racecar already set to debut at the ADAC Nurburgring 24 Hours Race.  It’s a stripped down light weight ready built Racecar aimed at the FIA GT racing series. The mid mounted Toyota V6 engines power has been increased and is hooked up to a six speed sequential paddle shift racing gearbox.

We look forward to seeing this amazing new machine from Lotus racing next year. 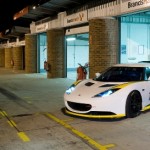