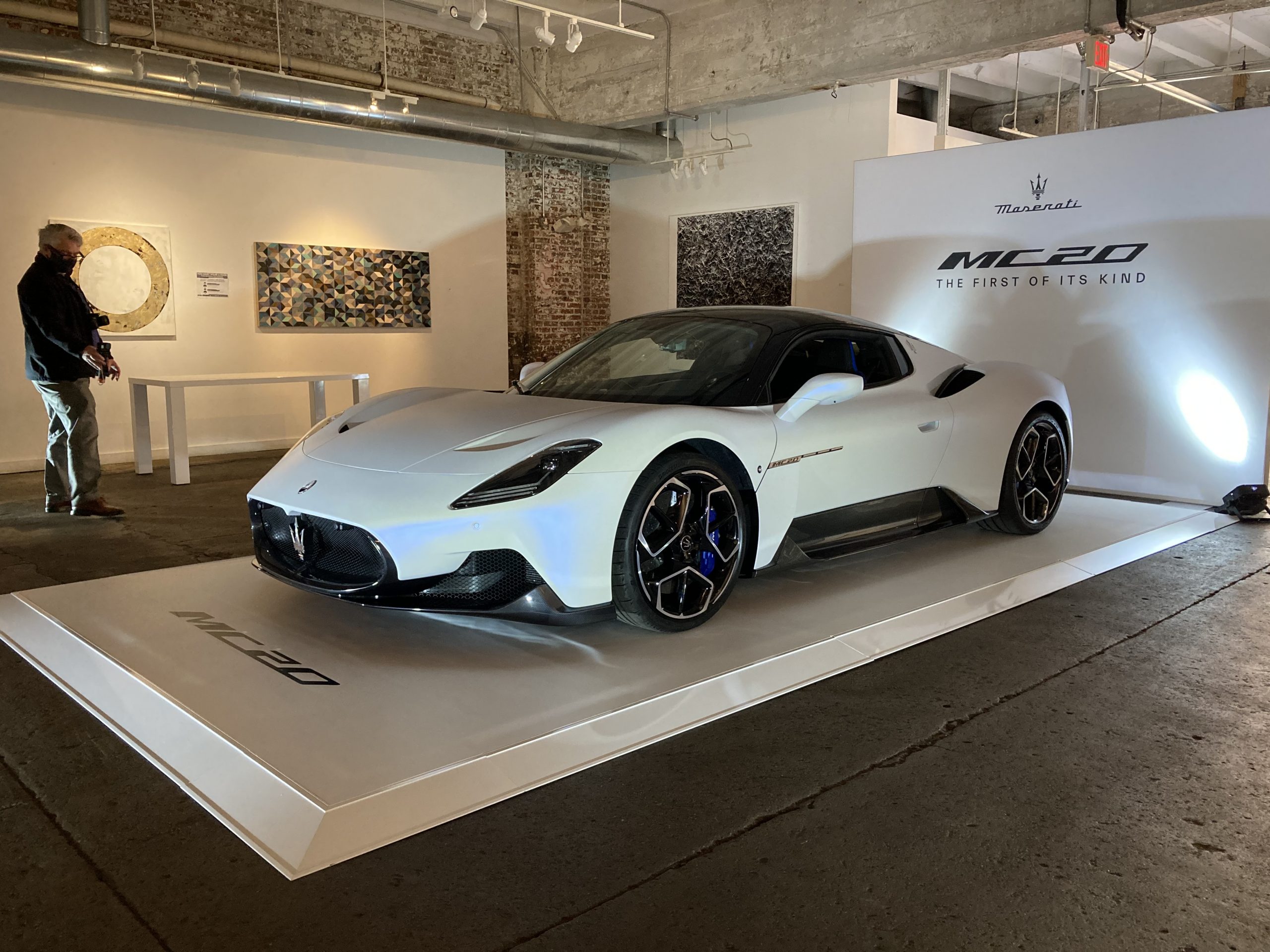 You, of course, have heard of Maserati. One of the most beautiful Grand Prix designs of all time – EVER – is the Maserati 250F, piloted by Juan Manuel Fangio to a World Championship in 1954. As a kid, I revered the 2-place Ghibli, placing it just behind Lamborghini’s Miura in my automotive pantheon. Much more recently, a drive in the 4-door Quattroporte reconfirmed the value of injecting a whole lotta’ sport into the sport luxury segment. And with a history steeped in competition successes and marketing missteps, Maserati is still around, still working to keep itself relevant. In its recently announced MC20 supercar, it’s once again vying for the garage space of the super affluent, along with the wall space of teenage boys. After an hour-long look, I’m thinking it stands a reasonable chance of securing both.

This supercar category is far removed from the world of the working journalist, and in most zip codes the MC20’s $210K base will secure you a nice ranch house…if not the whole ranch. Within the segment there are probably no bad buying decisions, unless you have a real distaste for initial depreciation; by the second tank of gas a buyer might have dropped $100K. But (I’ll guess) there’s nothing quite like walking into your garage, at noon or midnight, and looking at a mid-engined exotic you call your own. Whether it ends in the iconic ‘i’ (Ferrari, Lamborghini or Maserati) or is the street-specific product of a legendary racing brand (McLaren), ownership establishes a personal attachment to long and glorious histories.

In its MC20, Maserati’s design and product team build on the MC12, a competition-specific model introduced for FIA GT competition in 2004. Developed from a Ferrari platform, and using a Ferrari-derived V12, just 50 examples were produced for sale to the public, along with another dozen constructed for competition. The MC20 (‘MC’ is for Maserati Corsa, while ‘20’ represents the introductory calendar) will – it is hoped – be built in significantly higher volume while also having a competition component.

For its regional debut in the DC area, Maserati secured a gallery space near the DC Convention Center. With modern art on the walls, and three variants of Maserati’s production lineup there in a supporting role, the MC20 – finished in a matte white – was absolutely stunning, albeit in a mature, adults-only way. My initial take: photos simply don’t do this shape justice.

Having spent a few days in that same week driving the new C8 Corvette, the comparison was inevitable, even as the Maserati commands a window sticker that would buy three Corvettes. While the Corvette’s design is  intentionally aeronautical, the Maserati’s shape is organic. And while air is channeled in and around the Maserati’s form, it’s done so quietly, intended for an audience that is decidedly post-pubescent. Finally, in its proportion the MC20 cockpit seems to sit back on its chassis, while the Corvette’s design pushes driver and passenger into the front wheels.

Behind what appears to be a comfortable, functional cockpit is a 3.0 liter, twin-turbocharged V6 supplying 621 horsepower and 538 lb-ft of torque. That power is transferred to the rear wheels via an 8-speed, dual-clutch automatic. Once lit, the combination is good for a 2.9 second 0-60 on the way to a claimed 202 miles-per-hour top speed. Five driving modes give you the performance you want, from grocery getter to ‘you’re allowed one phone call.’

With customer deliveries for the new MC20 a full year away, we’ll have to wait for driving impressions. In the interim, Maserati is applying a full-court press with its lineup of GT cars, sport sedans and the Levante SUV. With the Germans utterly ubiquitous in most metro areas, perhaps Maserati’s moment in the spotlight has come. That, of course, would be ‘molto bene’, to both the super affluent…and those kids with bedroom walls.